…My three years in Anambra has been fulfilling – Mr. Aremu

Again, on Inspirational personality page, we bring to your read, the story of the  Anambra State Coordinator, National Youth Service Corps, Mr. Kehinde Aremu. This time, he will be sharing with us his three-year experiences as the NYSC Coordinator in Anambra state. Daddy Aremu, as we call him, will be leaving the state to serve in another capacity in the Federal Capital Territory, Abuja. During an interview with him, coordinated by the Fides Trends in Anambra (FITIA) team, they were almost in tears, because Daddy Aremu has been not only a friend to the Fides family but a great paddy to the FITIA team, since his stay in office.

Let us us read as he takes us on his three-year sojourn in Anambra:

Can you give us a summary of your three-year journey as NYSC Coordinator in Anambra State?

Before I came here, I was in the planning, research, and statistics department. But I think the most significant thing before I came here was that I spent an exceedingly small time in PRS and had a long time in human resource management and then skill acquisition and entrepreneurship development. 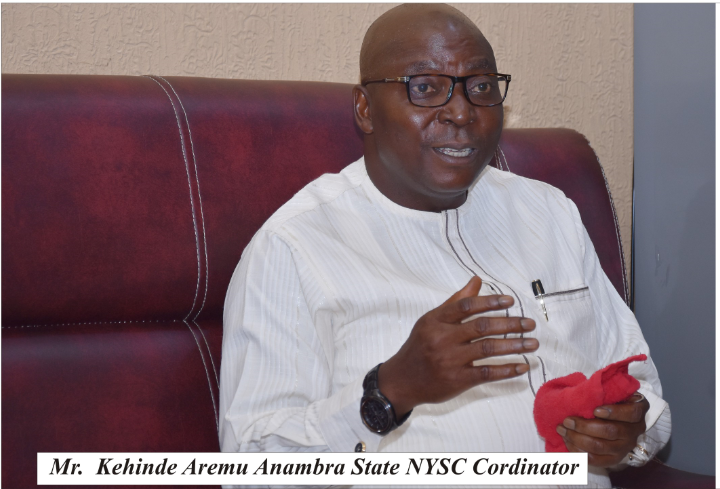 We started a train the trainer programme, accompanied with skill acquisition, entrepreneurship development, which was a significant journey for me. Because we were able to build the capacity of NYSC staff to be able to teach and complete the entire value chain – to write business proposals and write to seek for funds to run their businesses. I oversaw partnership development at that time, so I was able to get a lot of partners to get involved in the entrepreneurship training.

Incidentally, I woke up this morning and decided to wear this cloth you see on me today. It is so much cherished by me because we are just twenty in Nigeria that are trained and certified to teach entrepreneurship in the whole of Nigeria.

My promotion was delayed…

It is significant to also mention that I was supposed to have been the coordinator far before I was posted to Anambra. In NYSC, you become a coordinator when you attain the rank of deputy Director, which I attained since January 2015.But I was kept at the head office until 2018 when my juniors were already state coordinators.

That was not because I was being punished but because they had pains allowing me to leave the headquarters. It was like, if this guy goes, what will happen to all these things we are building? It even got to a point people started saying I was being marginalized because, to them, my juniors were moving ahead of me. But I knew what they needed me for.

That is an overview of the kind of background I had. Coming to Anambra State, I began interacting with the people within three days. I began to fill major gaps like knowledge by the staff: the staff members had little or no feeling of fulfilment in the job and in life. We began to introduce them into little businesses that we were allowed to do as civil servants.

I knew I had to work on their appreciation of the job and family life and God helped me to change their mentality. They saw little or no pride doing the job. No form of enthusiasm but all that changed. Their work environment (NYSC camp and office in Amawbia) was nothing to tell home about.

The first day I arrived Anambra, I had to go to the camp, I remember Mr. Ayo Ayinda, took me there. It took grip for me not to weep because the orientation camp was bad. But I had to set out to change the narrative and God also helped.

People may not understand what went on in acquiring and building the permanent camp at Mbaukwu/Umuawulu. There was a major problem that would not have made the orientation camp to become. With what I met on ground, that place wouldn’t have been completed in ten/fifteen years.

It was clear that they were not going to allow anybody enter that place.  But we had to do a lot of running around, nocturnal meeting, going to people to beg, cajole, appeal to conscience and all of that. Thank God we have it now. Also, the former office situated around Umueze, here in Amawbia, was so demeaning and I think that was one of the reasons staff members were not even proud of the work. You cannot even have visitors in your own office.

Also, many Corps members misunderstood Anambra indigenes for fetish people because of the many shrines and offerings to gods they encountered while entering the NYSC secretariat, some even sort for relocation after these encounters.

There are some things I remember now, which make me believe that I am a man of the spirit. During my first meeting in that place, I said to the staff members, how have you people been coping in this kind of environment? I said to them, as the Lord lives, I will not spend December in this office. 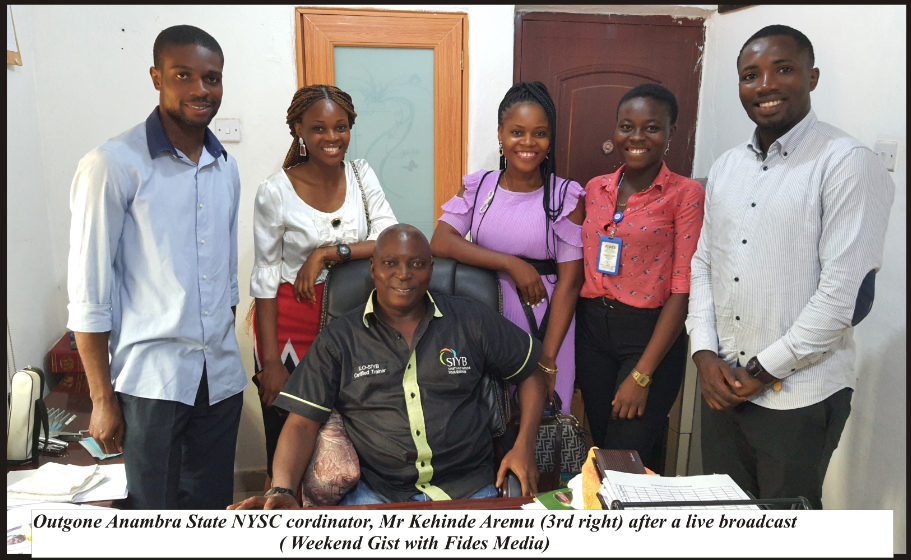 Honestly, I did not know anybody at that time. What I did was to set out to work, met the Governor, Chief Willie Obiano, and many prominent men in the state. It was then that the Anambra state governor took it up. The governor through discussions realized it had become a serious issue.

He told me to look for a good house around and he would pay. That was how we got this place we are presently. I did not even tell my staff; we got the place and he paid. I then rearranged the place, bought all the interiors we needed for each office, air conditioner amongst others, my staff still, were not aware. We went to orientation camp as usual and on the eve of our departure from Umunya, I gathered them and said, we are going back to town, but we are not going back to that office again.

We left camp on a Tuesday and then returned on a Thursday. When everyone arrived work, I took them to this new place. When we came here, we stood outside, and I told them to go inside to locate their own offices. Each office was already tagged according to the department they hold.

When they entered, they began to shout! They were extremely excited. I told them we were going back to Umueze, to pack all our belongings to our new place, because we had already furnished the place. You can imagine the relieve and joy and then, they felt they needed to work. Now they dress properly to go to work. These things are not tangible, but my biggest joy is that something changed in the heads of staff members.

We have a good relationship with the government.

The governor pays the rent for the building we are in presently. But I think through into the future: the governor might not be here forever, and some other person might not want to pay. I said we must get our own permanent secretariat. That is why we are building and have almost completed the building of the permanent secretariat. It is roofed, plastered, dug a borehole and we are fixing burglary proofs presently. I am happy because staff members appreciate these things.

With this overview you just gave, we feel that if you were given more time, you would have done more. How can you react to that, with the relationships you have built in Anambra?

Well, I already knew I would leave. With all sense of modesty, I denied myself a lot of things and privileges just to be able to get to where we are now on these projects. There were somethings that belonged to me by office that I did not bother to take, because I had a project in my hands.

My intention to reach out to the indigent.

The NYSC is a collaboration between the State and Federal governments. They all have their roles spelt out in the NYSC act which guides us. The state government has a lot of responsibilities which so many do not know. It is their responsibility to provide the camp, Corpers lodges and many of those. But the state may even tell you, we have our own project, look for money by yourself. But there is a way you will present your case to the state government, and they will be ready to help you even more.

The state government appreciates the contribution of the NYSC right now. I deliberately aligned my posting policy all through my stay here, with the yearnings and the gaps I identified especially in the educational and health sectors. Many do not know until I do an analysis. Some Anambrarians do not like to teach, they would rather go for trade. Meanwhile, they have children that are in school.

They are in kano, Kaduna, Abuja, Lagos, doing trade. Same with the health sector, how can you imagine an Anambra man who read Medicine or pharmacy, sit in government hospital, for what? They would rather hustle and set up their own health facility or go abroad to practice making good money. So, it is the Corp members I send to those government owned facilities, otherwise, the indigent ones will not have access to medical care, and they will die.

I make Corp members to realize that it is my deliberate intention to make them bridge this gap to help the state. I know how many Doctors come here with money for us to post Doctors to their private clinic. They have big hospitals but the Doctors themselves are getting old, so they need young Doctors to run those hospitals.

I usually tell them no, respectfully. They should go and employ, because there are indigent people in villages who need these Corp members, let them have that access. The Governor realizes that, and that is why he sees NYSC as a partner. Also, when they have any programme, I will attend, show my face, and do the much I can contribute my own quota.

How can you rate the staff motivation to work when you came and now that you are about to leave?

I wish I called somebody else to do that but since you asked, I will give you my own perception. These people were not proud of their job. They did not even see themselves as public servants; some saw themselves as dejected public servants. Their relationship with Corps members was not cordial, they always engaged in quarrels. I told them to build a relationship with these young people and they will respect you.

I built a cordial relationship with Corp members.

Make them to love their country through good relationship with them. It is only then, they will learn to work with their hearts. I have a relationship with every Corp member in the state. You all know how it was in camp because some of you served here (referring to the FITIA team). And that is the relationship we have nurtured to this level.

TO BE CONTINUED IN THE NEXT EDITION