The Metropolitan Archbishop of Onitsha, the Most Rev. Valerian Okeke, has ordained 4 deacons of the Salesian Congregation as Catholic priests.

No fewer than 30 priests participated in the Holy Eucharistic Celebration where dozens of relatives and friends of the newly ordained priests came to grace the occasion and felicitate them. 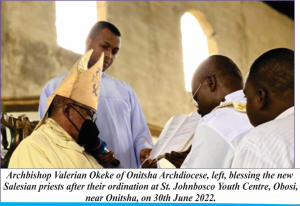 In his homily titled: “Living in the spirit of the good shepherd”, Archbishop Valerian Okeke urged the newly ordained priests to allow themselves to be possessed by the Spirit of Christ who he described as the  Good Shepherd.

According to the Archbishop, one who was possessed by the Spirit of Christ lived no longer for himself but for the one who had taken over him.

Archbishop Okeke called on the faithful who may have the privilege of working with the priests to cooperate with, and assist them, but never to mislead them in their sacred vocation.

He exhorted the new priests to live out the life of obedience, poverty and chastity, which, he noted, their priestly vows demanded from them.

The Metropolitan Archbishop also pointed out that the new priests had been configured as another Christ to be true shepherds, servants of God’s people and ministers of the sacraments after the mind of Christ, the Good Shepherd.

The Archbishop prayed for their priestly services to be effective, fruitful and spirit-filled, so that those they would encounter might have life in abundance.