Essaying on the 20th anniversary of the Episcopal consecration of Archbishop Valerian Maduka Okeke awakens a fascinating and inspiring experience that leaves one thoroughly edified in its wake. His bishopric verifies the fulfilment of God’s promise of giving his people shepherds after His heart, who will rule with understanding and knowledge (cf. Jer. 3:15).

Indeed, the Archbishop’s Episcopal ministry spells a grace-filled love affair with God and a hope-filled liturgy of self-donation for the true good of the flock of Christ. Each chapter of this Episcopal ministry is a stunning narrative of a Shepherd whose intense love of God drives being an agent of God’s goodness.

This anniversary is an acknowledgement of the impact of grace on this disciple and teacher, who deploys his multiple talents and gifts to inspire faith, rekindle hope and make love go viral. This piece underscores reasons to celebrate his Episcopal ministry as a testimony of the power of grace and a sacrament of God’s love.

Firstly, the Archbishop’s ministry is an eloquent echo of the centrality of the human person redeemed by Christ and inflamed by the Spirit in the world. In other words, he prioritises the salvation of souls, seeking the lost as part of the substance and style of his Episcopal ministry.

Through his pastoral engagement, he constantly emphasises that faith, hope and love should inform ethics, inspire politics, and drive economics. In expressing redeemed humanity, he celebrates the divine liturgy as the key to living the whole existence as an ongoing liturgy and, indeed, never-ending worship.

The Archbishop’s life-transforming ministry these twenty years testifies to love as what it was to be Christian. His ministry is a testament of love, and the Archbishop spells sacrament of God’s love. 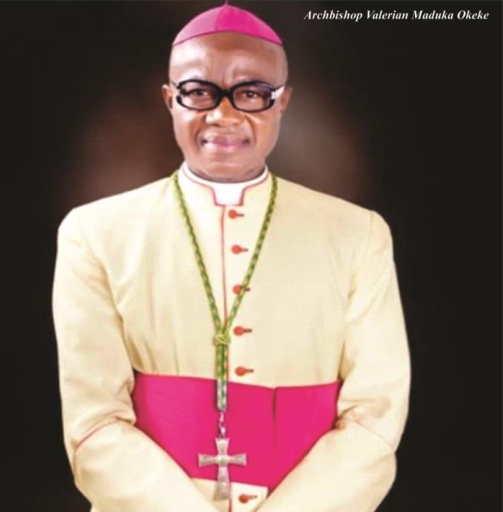 In reality, love is the distinguishing mark of all spirit-led pastors and the facial mark of all grace-borne institutions. The newness of the Christian religion is in the transition from law to love. While Christ remains the novelty of Christianity, love is the content of that newness – loving to the point of life-giving self-sacrifice even to death.

Love measures all worship of God, without which it becomes a routine celebration of an empty and superficial ritual that is neither spiritually uplifting nor edifying. Lack of love indicates an absence of the Spirit. The consequence is that worship becomes routine exercise that massages one’s ego, and tranquilises and self-assures the subject.

Within that context, the law becomes an elite apparatus for keeping in check the subjects to perpetuate dominance in a self-serving elite conspiracy. Love, essentially, is action-packed. It is a noun and a verb – romantic and effortful. It comes from us (eros) and comes to us (agape); it is of nature (given) and grace (gift), and it comes to nought without cultivation.

The centrality of love in any true religion requires that a true disciple be seasoned with the ingredients of love since true worship is parsed by love. Without love, man becomes a wolf to man. In loving, a Christian expresses the instrumental value of law and its mission to minister to man’s true good and never to master man.

This priority of love over law is quite evident in the expo of the last judgment, when the just judge will assess the quality of our love (cf. Matthew 25:31-46) and the degree of its contribution to God’s providential government of the creation. This final judgment will reveal the quality of the souls’ transparency as a reflection of God’s love and Sacrament of Divine Presence.

In all sincerity, one can agree that the episcopacy of the Archbishop is nothing but perfection-in-progress. It is in steady progress in its growth as a Sacrament of God’s Presence. It is a progressive effort to embody God’s love. Relative to the priests under his pastoral leadership, he is a father who loves and cares for his children. He enjoys the presence of his priests and the people of God and treats them with love.

Whenever he takes decisions, as much as possible, he does so from the love of God, the good of the Church and the wellbeing of the person in question. For instance, while sending his priests on missions or studies, he cares for the Church’s needs and the candidate’s competencies and never the mundane consideration of origin. The same principle guides his personnel placement.

He hastens to assist the priests and the faithful even when they go astray or are found at the roadside of existence. He approaches them like the Good Shepherd, the Good Samaritan, balancing the good of the souls, the Church and the person in question.

The narratives about the Archbishop’s Episcopal ministry are imperatives for Christian discipleship. He has allowed faith in Christ to educate and transform his disposition towards people. As such, he values both our identity as ontological siblings, sharing the same humanity as members of the universal family of God and our belongingness to Christ through faith. This fact disposes him to a grace-attitude towards all, always recognizing that the human person is not an object to be exploited; instead, he is a brother with whom one shares the vocation to steward creation.

In living his Episcopal vocation, he allows love to triumph over law. He embraces the primacy of love after the example of the eternal Galilean, Jesus Christ. A few examples of the pastoral initiatives and administrative acts will make this narrative evident. Last year, he offered scholarships to 90 students to mark his 40th anniversary in the priesthood.

In truth, the scholarships he has offered to deserving students of all levels of education will be in excess of one thousand students. His apostolate to Federal Prisons, which he visits at least three times a year, has not only yielded many infrastructural, human welfare and attitudinal benefits but has inspired such an apostolate far and near.

He crowned it by building a multi-million-Naira state-of-the-art skill acquisition centre to make the inmates better persons after serving their time. Ordaining a dying Fr. Gerald Uba of blessed memory to the priesthood a few months before his death was not only an audacious act of love but also makes a bold statement that the priesthood of Christ prioritises being over doing.

In ordaining Fr Benjamin Ogbunuko, who had had an accident ten days to ordination and was in a wheelchair, he demonstrates the healing power of love. The Archbishop’s show of pastoral solidarity to the bereaved is top-notch and Christ-esque. By insisting that non-clearance of accumulated debts cannot cost any person Christian burial, by creating parishes in remote parts of the Archdiocese to reach the poor with the Good News and through his special care for the poor, the Archbishop stands out as a testimony of God’s providential care.

Archbishop Valerian Okeke dedicates his Episcopal ministry to working for the fullness of life of the flock of Christ. He began his ministry with a mission of love, drawing the flock to Christ so that they could experience the fullness of life. He radiates the joy and peace of knowing Christ and his salvation.

He thus represents the compassion of Christ to those who are facing various challenges, including the suffering, the oppressed, the harassed, the marginalised and all those at the peripheries of society either by situation or location. His sole aim is that by living the gratitude that marks the life of beatitude, he would thus bring the Good News of Christ to those sorely in need of it. Consequently, his ministry inspires faith, comforts the afflicted, encourages and assures the faithful in their hope, and spreads love.

Under his pastoral leadership these twenty years, Archbishop Okeke has engendered a deeper appreciation of the sacrificial and oblative meaning of the priesthood. His ministry has mainstreamed and centralised love as true discipleship’s core value. As such, he enjoys a very happy, peaceful and cooperative Presbyterium. His collaborators struggle to reciprocate his generous and benevolent disposition towards all, which eschews all forms of discrimination. He is a sacrament of God’s compassionate care; he signifies God’s love. Congratulations, Your Grace!

*Fr George Adimike, a priest of the Archdiocese of Onitsha.