The Catholic Church in Maiduguri is one that has known so much pain and persecution as a result of repeated savage acts of terrorism by jihadist groups, characterised by bombing, destruction, burning of Churches and killing of Christians while forcing some to convert to Islam on penalty of death.

The presence of the Pope’s representative to Nigeria, therefore, and his words of comfort to them were very soothing balm to heal their troubled souls, as well as a great source of encouragement to carry on with their faith.

Archbishop Antonio Guido Filipazzi, the Apostolic Nuncio to Nigeria, was at the St. Patrick Catholic Cathedral in Maiduguri on July 7, 2022, not only to

ordain Most Rev. John Bogna Bakeni as the Auxiliary Bishop for the Diocese, but also to commend the Clergy and the people of God for their steadfastness in the face of many trials and persecutions which has lasted well over a decade. “I wish to congratulate dear Bishop Oliver, his priests, consecrated persons and all the faithful because you have welcomed and collaborated with divine Grace,” the

While noting that it was his third visit to the Diocese in five years, the Prelate commended the Bishop of Maiduguri Diocese, Most Rev. Oliver Doeme, for the meaningful growth witnessed in the Diocese, “although for several years in this area, you have been suffering from attacks, killings, violence, insecurity, destruction, population dispersion, and economic and communication difficulties.” 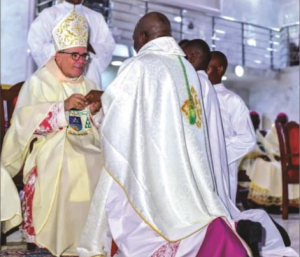 He added that, “These problematic, sometimes dramatic conditions make the growth of the Diocese of Maiduguri even more evident. Indeed, by His Grace, you have grown! Therefore, dear faithful of the Diocese of Maiduguri, you have a valid reason to rejoice, hope, and believe that when you are united to the Cross of Jesus, you bear much fruit, as He said of Himself and us!”

Moreover, based on the teaching of Pope St. Paul VI contained in the “Creed of the People of God”, the Nuncio explained that the true growth of the Kingdom of God “cannot be confounded with the progress of civilisation, of science or of human technology, but that it consists in an ever more profound knowledge of the unfathomable riches of Christ, an ever stronger hope in eternal blessings, an ever more ardent response to the love of God, and an ever more generous bestowal of grace and holiness among men.”

He further said that much as material means are necessary for growth in the Church, they must never obscure the supernatural dimension of the Church’s life and action. “She (the Church) truly grows if her members grow in faith, which is the knowledge of the unfathomable riches of Christ.”

The true indicators of growth in the Church consist when her members grow in hope, which is the expectation and preparation of eternal life; when they grow in their response to the love with which God loves humanity and imitate Him; when she and all her members offer to everyone grace and holiness.

“Therefore, true growth of the Church occurs when the eternal and earthly dimensions are not opposed and mutually excluded. The Church’s proximity to earthly problems is not an end in itself. The Church’s ultimate intention is to enlighten men with the light of Christ and gather them all into Him, their only Saviour. He therefore warned that “If the Church does not offer the world this, which she alone possesses, in reality, she would have nothing to offer.”

The Archbishop called on the people to imitate St. Patrick, the patron saint of the Cathedral and take to heart his vision which says: “Every day there is the chance that I will be killed, or surrounded, or be taken into slavery, or some other such happening. But I fear none of these things because of the promises of heaven. I have cast myself into the hands of almighty God, who is the ruler of all places.”

The Nuncio expressed appreciation to the government and people of Borno State and the representatives of the other religious denominations, noting that “Catholics respect everyone, hate no one, pray for the whole of society and are ready to collaborate with everyone for the true good of each person, whatever ethnic group, religion or place they belong.”

On his part, the President of the Catholic Bishops Conference of Nigeria (CBCN), Archbishop Lucius Iwejuru Ugorji, described Bishop Oliver Doeme as a courageous, selfless and humble shepherd worthy of emulation and congratulated him for the joy of the day.

He prayed for the many people in the State who lost their lives and hoped that those who are still displaced in IDP camps are enabled to return to their ancestral homeland. He also called on the Federal Government to do more to secure the lives of citizens so as to avoid total collapse of order because there is a limit to what people can endure.

Bishop Charles Hammawa of Jalingo Diocese, on behalf of the Metropolitan of Jos Province, Archbishop Matthew Audu, welcomed Bishop John Bogna Bakeni to the Province and encouraged him to continue to support Bishop Doeme in the task of administering the Diocese of Maiduguri.

In his response, Bishop Doeme, visibly overwhelmed with joy, thanked the Holy Father, the Nuncio, his priests, all Bishops and everyone who made the day possible. He also expressed gratitude to the Borno State Governor for his enormous support and for the very cordial rapport that exists