The legendary freedom fighter and the first black Archbishop of Cape Town was reported to have died peacefully at his home in the  suburb of Cape Town on Sunday morning (Boxing day), 26th December 2021 after a long battle with prostate cancer at the ripe age of ninety years.

The diminutive and internationally renowned freedom activist was buried on Saturday 1st January 2022 after an impressive but solemn funeral service at St. George’s Cathedral Cape Town attended by several dignitaries including the South African President Cyril Ramaphosa who had earlier declared two weeks of national mourning and the national flag was also ordered to be flown at half-mast as a mark of honour for the departed icon and humanist par excellence.

At the funeral service, President Ramaphosa paid glowing tribute to the indomitable spirit of the departed fearless prelate amid the overpouring of tributes by world leaders such as President Joe Biden of the U.S, former U.S President Barrak Obama, Queen Elizabeth II of England, Prime Minister Borris Johnson of the UK, U.N Secretary-General Anthonio Guterres, Archbishop of the Canterbury Justin Welby, President Buhari of Nigeria amongst others. The body of the late Archbishop dressed in a simple gasket according to his wish was later taken to a certain location outside Cape Town for private cremation. 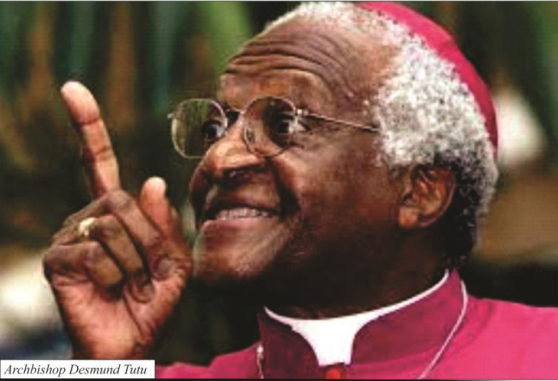 It would be recalled however that the death of Archbishop Tutu occurred quickly on the heels of the sudden demise of yet another champion of democracy and freedom and former South African President and architect of democratic and free South Africa and Nobel peace Laureate F.W. de Klerk of blessed memory.

It would also be recalled that late former President De Klerk presided over the final capitulation of the obnoxious and brutal apartheid racist regime that held down the black majority South Africans for more than a century.

The departed outspoken prelate, sacrificed almost his entire life for the liberation and emancipation of the Black South Africans still under the yoke of colonialism and subjugation by the erstwhile obnoxious and repressive white minority apartheid regime in South Africa during the darkest era in the chequered history of South Africa.

The nationalist icon and freedom fighter Desmund Tutu led his own struggles for the liberation and emancipation of his fellow black South Africans from the church pulpit at the most critical and turbulent period in South Africa when notable ANC leaders and freedom fighters such as Nelson Mandela, Oliver Tambo, Joe Slovo, Thabbo Mbeki and host of other nationalists were incarcerated in Robin Island prison and detention camps by the successive white minority regimes from the period of Hendrick Verwoerd, Botha, Voster and lastly F.W de Klerk.

Archbishop Tutu carried his battles for the liberation of his people to the global community through his diplomatic shuttles to the world capitals in Washington DC, London, Paris and the U.N Headquarters in New York where he often addressed the world leaders and constantly appealed to their conscience to intervene in the terrible conditions and suppression of the black majority South Africans by the tyrannical white minority regime.

Desmund Tutu will certainly be remembered for his untiring efforts, courage, resilience and doggedness in his avowed determination to free his people from many years of bondage and oppression at a time it was considered utterly risky and rather suicidal to confront the repressive and totalitarian racist white minority regime in South Africa.

In the course of his relentless struggles for freedom, Archbishop Tutu equally adopted economic sanction strategy against the white minority regime and consistently called for severe economic sanction and total isolation of the white minority regime by the international community as well as the strict enforcement of these severe measures against South Africa by the global community which later culminated in the eventual collapse of the apartheid regime and the ultimate freedom and independence of the black South Africans.

It is instructive to mention that the bravery, steadfastness and uncommon determination of the fearless Archbishop Tutu during the liberation struggles contributed tremendously towards the eventual freedom and independence of the black majority South Africans who today breathe the fresh air of freedom and emancipation in their own God given country called South Africa or “Azania”.

It is no gainsaying the fact that history would certainly remember this rare gem of a personality, Desmund Tutu for his immensurable contributions during the epic struggles for the liberation and freedom of his people. It is worthy of mention also that the eventual liberation and independence of the black majority South Africans which hitherto was considered a mere fantasy or day dream by the erstwhile white minority racist regime was ultimately achieved in the life time of the irrepressible Desmund Tutu against the backdrop of the infamous assertion or rather prediction by the arch-racist Ian Smith, the erstwhile Prime Minister of the neighboring defunct Rhodesia now Zimbabwe to the effect that majority rule in then Rhodesia could never be achieved in his life time. Ian Smith had then boasted that majority rule in his defunct Rhodesia could only be achieved in one thousand years.

It is pertinent to mention in this piece however that political developments in the then Ian Smith’s Rhodesia was largely influenced and inspired by the oppressive and totalitarian racist regime in the neighbouring South Africa hence, Ian Smith in his  morbid delusion assumed that majority rule in his defunct Rhodesia now Zimbabwe was an impossibility in his lifetime.

Interestingly, Zimbabwe eventually achieved her independence in 1980 and in the lifetime of the arch racist and colonialist Ian Smith as the historic event happened before one thousand years as earlier predicted by the deluded Ian Smith and his co-travelers.

In conclusion, the life and times of late Archbishop Tutu should therefore serve as a great lesson for contemporary leaders across the globe particularly in Africa and Asia and they should therefore imbibe the virtue of selfless service, and personal sacrifices for the common good of the people as eloquently demonstrated by the departed prelate Desmund Tutu during his life time and the entire humanity could benefit immensely from the legendary legacies he left behind.

There is certainly great honour in selfless service to mankind and the world would be a better place only if leaders at all levels across board could spare a thought and imbibe the virtues of personal sacrifices and selfless service to their people and which is the greatest tribute the world could pay to the departed icon, nationalist and freedom fighter Archbishop Desmund Tutu of blessed memory.