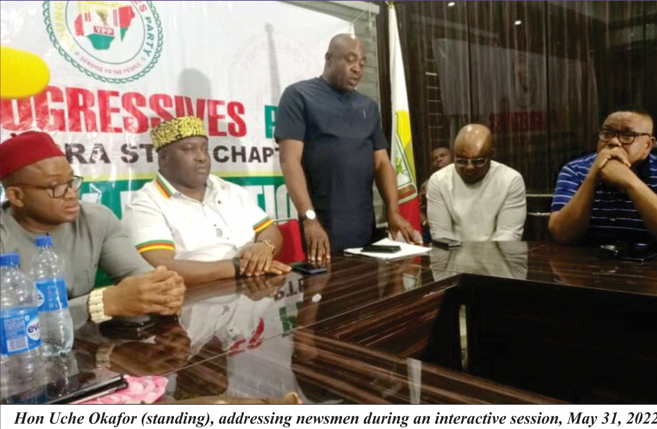 Okafor disclosed this at a media parley organised by the Senator representing Anambra South Senatorial District, Senator Ifeanyi Ubah, and other candidates of YPP for 2023 general elections, after emerging the candidate of the party for Oyi and Ayamelum Federal Constituency.

He said he was wooed to YPP by Senator Ubah, whose leadership style and achievements in the 9th Senate, , were glaring. He stated that he joined YPP with his former APGA structure across the 21 Council Areas, and declared that winning all the national and state assembly legislative offices in Anambra was possible.

He admitted to have has secured fifty membership cards of the party for his constituency ahead of the 2023 general elections.

Also speaking, the YPP Senatorial candidate for Anambra Central District, Dr. Chinedu Umeadi, explained that the party had better programmes for the Anambra people and the people of Nigeria than other political parties.

He urged Anambra residents to obtain their permanent voter’s cards and vote for candidates of YPP in the 2023 general elections as they would guarantee the dividends of democracy for the people through quality representation.

Earlier, Senator Ifeanyi Ubah, who is also the candidate of YPP for Anambra South, said he broke the jinx in Nigeria in the 2019 general elections for being the first to be elected on the platform of the relatively unknown party (YPP) and had continued to make history at the red chamber through impactful bills and motions.

Ubah, appealed to Journalists in the state to support YPP by projecting its activities to International communities.