The Anambra State Polytechnic (ANSPOLY), Mgbakwu, in Awka North Local Government Area of Anambra State, recently, at the school’s auditorium, held a physical and virtual multi-disciplinary international conference with the theme: ”Knowledge, Technology and Innovation for Africa’s Transformation”, in collaboration with the Centre for Advanced Arts, Science, Social and Management Research (CAASSMR).

In her opening remarks, the Rector of the Polytechnic, Dr (Mrs.) Nneka Mefoh, said the institution had her maiden International Multi-disciplinary Conference in 2019 and was adjudged a good outing, noting that it opened their eyes to the corporate character of the members of the Polytechnic community. 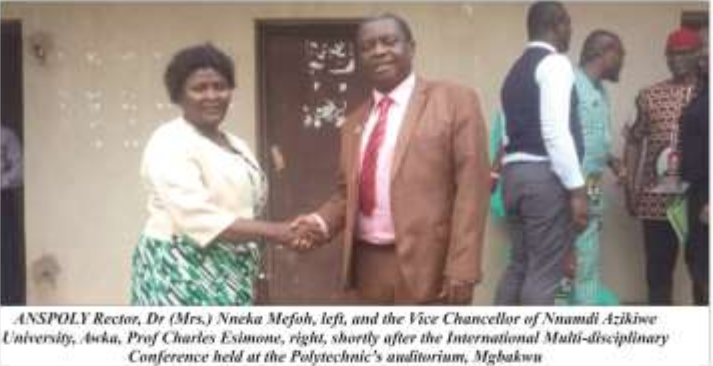 She said they worked tirelessly to ensure that the second conference met the global academic conference standard, stating that they had presentations and panel discussions on various issues, workshops and other interactive sessions that would fill their intellectual appetite.

The ANSPOLY Rector announced that they had twelve NBTE-accredited departments in four schools at the National Diploma (ND) level and that the Polytechnic was currently preparing for the visitation for the approval of more programmes, particularly the Higher National Diploma (HND) Programmes, adding that they had the list of programmes and other information on their website.

Dr Mefoh said as a young institution birthed in 2017, though it was formerly a monotecnic which had achieved a lot in terms of standards.

She thanked God for His mercies and Gov Willie Obiano, for the efforts to make the institution great in the face of the global economic meltdown, the construction of access road from Awka to the Polytechnic, and ongoing construction of internal roads, noting that it had actually given them the push to invite people to the institution.

‘All hands were on deck, with all doggedness, even when the problem of dearth of funds was a critical challenging factor, the academic, technical and non-academic staff, worked together to make sure that the conference was a success.

‘Indeed, it was a good one. With all the enthusiasm, we all dreamt of a greater 2020 conference which did not hold eventually due to the challenges posed by the COVID-19 pandemic that ravaged so many parts of the world,’ she said.

Dr Mefor stated that over ninety abstracts were received from scholars all over the world and that in view of the post-COVID challenges in education, the conference was held in a hybrid form, appreciating God for modern Information and Communication Technology, which, she said, made it possible for people to attend conferences from the cool comfort of their rooms or offices.

The ANSPOLY Rector noted that academic conferences were necessary and encouraged researchers to be committed to their work.

‘This time around, we included a pre-conference workshop that prepared attendees for the conference proper. The theme of this year’s Pre-conference workshop was, “The mid-point between Academic Research and a Technologically-driven Economy”, anchored by an erudite scholar, Professor Chris Ezeibe, from the UNN.

‘The paper carefully identified the mid-point and married academic research and our dream economy. We are very sure that the participants learnt a lot and should be ready to put that into practice in their various endeavours,’ the ANSPOLY Rector said.

She said that Polytechnic education had a technological emphasis and was very practical in nature which was why ‘we are striving to keep on bringing scholars together for academic and practical interactions which we hope will eventually yield the desired fruits for the betterment of our society, especially Africa.

‘Anambra State Polytechnic, Mgbakwu, has an agricultural background, being an offspring of the erstwhile Anambra State College of Agriculture, Mgbakwu. As such, we have recorded so many researches in the area of agriculture by the members of the academia in our community. The other disciplines found in the Polytechnic are not left out and they are striving for the top of their fields,’ the Rector noted.

Meanwhile, the Vice Chancellor of Nnamdi Azikiwe University, Awka, Prof Charles Esimone, while presenting a keynote address, described all those involved in election and political malpractice as illiterate, saying there was no way Africa would move forward with people who mortgaged their future and that of those around them just for immediate gains.

‘Africans are backward because of these individuals. They care less for the masses. All they are concerned about are their pockets and nothing more,’ he said.