Another Police Station Attacked in Imo

Barely three days after a severe attack by unknown gunmen on the Imo State Police Command Headquarters and the Correctional Centre in Owerri, the unknown gunmen have again attacked Mbieri Divisional Police Headquarters situated in the Mbaitoli Local Government Area of Imo State in the early hours of last Thursday.

Reports have it that the fleeing gunmen struck around 1am and immediately released the suspects in custody of the police facility.

The hoodlums also took away the mobile phones belonging to suspects and the police operatives at the police station. 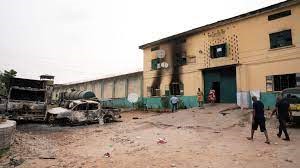 Confirming the attack, the Police Public Relations Officer in the state, Orlando Ikeokwu, said one police officer was missing, while two others were injured, owing to the resistance put by the policemen on duty.

Ikeokwu, also confirmed that some detained suspects in the police facility were freed by the gunmen.

He however assured that the police authority in the state had activated its tactical units to commence investigation into the attack immediately.

Fides reports that six Divisional Police Headquarters had been attacked between February and April, apart from the State Police Command Headquarters and Owerri Correctional Centre which were attacked on Monday, respectively, with over 1, 880 inmates freed and over 30 vehicles burnt. As at press time, no arrests had been made, either of those behind the previous attack or those who perpetrated the second.