And the Door was Closed

I was twice a victim of door closure. In 2008, I embarked on summer holidays to Germany. By then I was working in the Lord’s vineyard at Abagana. After performing the morning Holy Sacrifice, I dressed in my clerical suit. Proudly, I admired myself in a standing mirror and exclaimed, “Fine man! Today na today! Ya kpotuwa!” One of my friends drove me to Enugu Airport to catch 11a.m flight to Lagos.

I sat comfortably at the back seat as car owner. At Ugwuoba we stopped briefly to perform an act of charity to the less privileged begging by the roadside. Afterwards we continued our journey. By God’s grace, we arrived at Akanu Ibiam Airport Enugu safe and sound by 10.24a.m. My friend discharged me from his car and wished me journey mercy to Deutschland. I expressed my gratitude over his kind gesture. We embraced and separated. He left for home while I went into the departure apartment of the airport to check in.

At the counter I greeted the officer sitting behind. I asked her to check me in for the 11.00a.m flight to Lagos. She looked at me pitifully and said, “Sorry Sir, it is too late. The counter has been closed, the passengers have boarded the plane and your flight is about to depart to Lagos.” Immediately, my heart failed me. I asked for clemency but all to no avail. Within few minutes, the plane took off.

I wanted to perform magic to see myself inside the departing plane. It was an effort in futility. The next flight to Lagos on that fateful day was at 6.00p.m.  That would be too late because the check-in from Lagos to Germany by Lufthansa ends at 7.00p.m. My flight to Germany was at 10.00p.m. I was fixed at a particular spot like a non-living organism. Confusion took over my entire system. I missed my internal flight and might miss the international flight as well. It was also too late to travel by land. I saw the world somersault instantly.

Finally, I decided to make a try-your-luck by waiting for the 6.00p.m flight. As I was uncomfortably waiting, I was soaked in uncertainty. Seven times I went to the white house to ease myself due to accumulated emergency urine. I wanted to sleep, but sleep eluded me. I sat at a spot and was seeing stars coming out of my eyes.

Eventually we queued up and started boarding at 5.00p.m. I made sure I was not near to the last person in the line. Boarding was completed. We waited for take-off. Time was against me. I wanted to take over from the pilot so that the plane can fly at extraordinary speed. 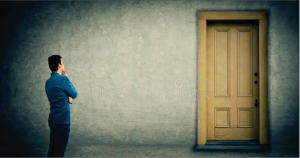 Nonetheless I considered it suicidal since I am a novice in that aspect. My expertise is at the Altar of God and not at the cockpit. To add salt to an already bleeding injury, it was announced that our plane, due to unavoidable circumstances, would depart at 6.15p.m. On hearing this, I lost momentary consciousness. After a while, an unseen hand resuscitated me.

At exactly 6.15p.m, our plane took off. We arrived at the local wing of Murtala Muhammed International Airport Lagos by 6.55p.m. Before the protocols of disembarking from the plane was completed and moving over to the International wing, it was some minutes after seven post meridiem. I prayed to meet an Angel of Mercy at the check-in counter. Unfortunately I met an iron brick.

The young man behind the counter told me frankly, “Man of God, you came too late. The check-in has been completed and the counter has been closed.” I shouted, “What! The devil is a liar!” Could you believe that all the saliva in my mouth dried up as I was begging for clemency? Regrettably Mister Clement was nowhere to be found to grant me the clemency. I cried, “My God, my God, why have you forsaken me?” No answer came.

Dejectedly I sat at a corner at the airport and was lost in thought. The door has been closed before me both at Enugu and Lagos. What a double tragedy! I sighed over and over again. Hungry mosquitoes clustered around me and were sucking blood from my tensed body.

What annoyed me most was that one of the mosquitoes flew into my right earlobe and made a stupid noise. Angrily, I slapped it heavily. I missed crushing it. Instead I hurt my ear and it was sounding like siren. I soliloquized and asked myself, “What is really happening with me today?”

As I was thinking over the next line of action, I looked up and saw His Eminence, John Cardinal Onaiyekan of Abuja Archdiocese and Bishop Martin Uzoukwu of Minna Diocese. They were dressed in clerical suit with their travelling bags hung over their shoulders. The cardinal looked attentively at me and said, “Gentleman, I think I know you. Why are you sitting here at this hour?” I smiled unnaturally and replied, “Your Eminence, I missed my flight to Germany.

I am sitting here because I don’t know where else to go.” He asserted, “No, you can’t sleep here. Follow us and let me take you where you will pass the night. We also missed our flight.” I laughed within me and muted, “So, I am not alone.” I stood up, carried my luggage and followed them. The rest of the story will be for another day.

The biblical quotation: “And the door was closed” (Mtt. 25:11) is about the ten maidens who attended a wedded couple’s reception at night. Five of them were wise while the five others were foolish. The wise ones carried their lanterns with extra kerosene. The foolish ones took their lanterns without having standby kerosene. When they arrived, the wedded couple delayed in coming out.

Hence they got weak and slept off. At midnight, an alarm was raised that the couple was around. By this time the lantern of the ten maidens were growing weak due to lack of kerosene. The wise maidens poured their standby kerosene into their lanterns and they started burning bright.

The foolish maidens asked for help from the wise ones. Their request was turned down because the kerosene would not be enough if they lend them a reasonable quantity. The foolish maidens were asked to go out and purchase kerosene from sellers. As soon as they went out, the door was closed.

When the foolish maidens came back, they met a closed door. They knocked and knocked, but their voices were not heard and no help came. Thus they were locked out from the wedding banquet. So it will be at the end of time. If a proverb is used and its explanation made to you, then the bride-price paid over your mother at her marriage becomes useless.

A word is enough for the wise. Someone who is not wise is foolish. I was born on April fool day. By birth I am foolish, but by diligent struggle I became a wise fool. A wise fool is hundred percent better than a foolish fool.

Therefore we must struggle for our salvation by carrying bright burning lamps always in order not to stumble over evil obstacles on the way to our eternal destination. Saint Paul tells us that we shall reap whatever we sowed here on earth when the final bell rings (confer Galatians 6:7). Death is inevitable. After death comes judgment. Then follow eternal reward in Heaven or eternal damnation in Hell.

The hen advised her chickens to always be alert as they search for their daily bread, because their archenemy the kite can strike at any moment. Likewise Saint Peter admonished us: “Be calm but vigilant, because your enemy the devil is prowling like a roaring lion, looking for someone to devour” (1 Pt. 5:8). There is no repentance in the grave. Therefore, we must repent now or else the door will be closed as soon as we die unrepentant. By then no more divine mercy will be shown to us. It is best to make hay while the sun shines!