Satisfied with what they described as his impressive quality representation, stakeholders and the entire people of Anaocha 2 Constituency have unanimously endorsed the current member representing the Constituency in the Anambra State House of Assembly, Hon Ejike Okechukwu, for a second term bid.

The endorsement was the outcome of the maiden town hall meeting of Hon Ejike Okechukwu with the constituents of Anaocha II Constituency, held at White Castle Hotels, Neni on November 5, 2022. 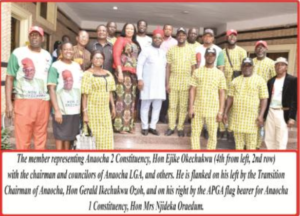 Many individuals who spoke at the event, described the legislator as an icon of quality representation. According to them, the legislator, fondly known as Ogbuefinukoefi, had in the three years plus he had been representing Anaocha II Constituency, positively touched the lives of almost all the constituents as well as ensured that his representation touched all the six communities of the constituency.

The event had the Managing Director/CEO of Anambra State Water Corporation and a former Executive Chairman of Anaocha Local Government, Hon Engr Ikeobi Ejiofor, as the chairman of the occasion.

Speaking on the occasion, the Deputy Governor of Anambra State, Dr Onyekachukwu Ibezim, expressed delight over what he described as an impressive score card that was presented by Hon Ejike Okechukwu. 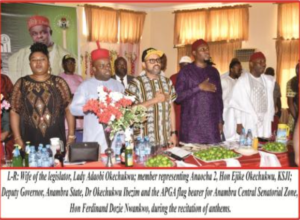 According to the deputy governor, the scorecard was an indication that the legislator desired to work and did so.

The deputy governor, who also represented Governor Chukwuma Soludo, noted that if other legislators would toe the part of Hon Okechukwu for quality representation, Anambra State would be a better developed state.

In their various speeches, the transition chairman of Anaocha LGA, Hon Gerald Ozor, and Igwe Rufus Iloduba, Igwe Oranyelu of Aguluzigbo; described Hon Okechukwu as an icon of quality representation who had done so well for Anaocha II. They threw their support behind him for a second term. 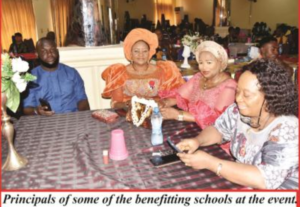 While endorsing Okechukwu for a second term, the President General of Aguluzigbo, Hon Chinwike Mmadueke; the Deputy President General of Nri, Chief Paschal Okeke; Sir Chijioke Ibeanu of Neni and Hon Ken Nnamonu, as well as others who spoke on behalf of their towns, maintained that Hon Okechukwu had done very well for the constituency.

According to them, Okechukwu had the good of his people at heart, remained the best legislator in Anambra State House of Assembly and would do marvelously well if re-elected. 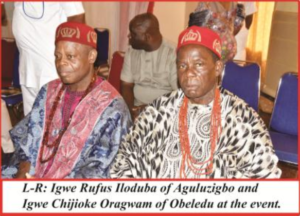 Earlier in his address of welcome for the event, Hon Ejike Okechukwu stated that he had been active in law making, had ensured that nothing which was due to his constituents eluded them and had been efficient in oversight functions as the chairman, House Committee on Basic Education, as well as other communities.

Among the achievements presented by Hon Okechukwu in his scorecard was sponsorship of over 20 motions among which was the urgent need for teachers in primary and secondary schools in Anambra State.

The motion, according to him, caused the state government to employ more teachers in the state. 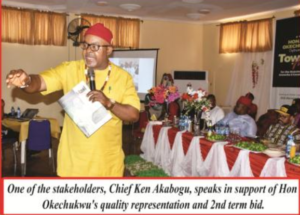 Others were facilitation of employment for over 30 persons of the constituency; empowerment of over 20 youths and women through his OgEP2020 Empowerment Programme and attraction of renovation of Community School, Aguluzigbo, Migrant Farms School, Nri, Community High School, Obeledu and Ajani Community Primary School, Ichida, among others.

They also included donation of education materials to schools, facilitation of tertiary education admissions for many constituents, annual Christmas distribution of bags of rice and other items, to his constituents from 2019 till date; building of 3-bedroom bungalows for needy widows, scholarship awards to pupils and students, enrolment of many individuals into the Anambra State Health Insurance Scheme and facilitation of N500,000 federal government COVID-19 grant for 33 beneficiaries from Aguluzigbo, Neni, Nri, Obeledu, Akwaeze and Ichida towns that make up Anaocha 2 Constituency, as well as one person from Agulu. 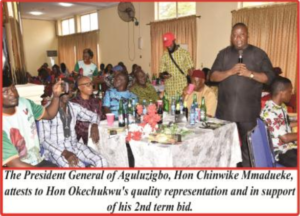 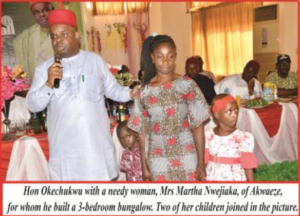 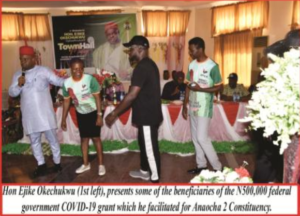