Some two weeks ago, the Anambra State Government of Prof Chukwuma Soludo reeled out some tough measures aimed at aggressively addressing the deteriorating security situation in the state. The summary of the measures include:

That any community and/or individual land used as camps by terrorists would be forfeited to the government.

The use of tricycles, motorcycles and shuttle buses banned on Mondays till further notice.

Imposition of a 6pm to 6am curfew on keke (tricycle), okada (commercial motorcycle) and shuttle buses till further notice.

Operation know-your-tenants for landlords as any house linked to any tenant caught indulging in such crimes as kidnap, arson, gun running, drug dealing, rape, murder, armed robbery, possession of fire arms would be confiscated by the government.

Institution of a N1m bounty for anyone who provides information on those hyping, praising, supporting or offering any support to a group of killers known as Unknown Gunmen, UGM.

Compulsory CCTV to be installed in all filling stations  and  hotels in Anambra State and footages submitted to the security agencies weekly.

Those measures were widely acclaimed by the citizenry as comprehensive and capable of turning the tide against the heightened criminality in the state. Although the spate of killings has continued, last Sunday however witnessed the first time the hoodlums failed to strike. Indeed, apart from announcing Mondays as days of sitting at home, they have seemingly chosen Sundays to mow down unsuspecting victims. But last Sunday no incident was recorded. 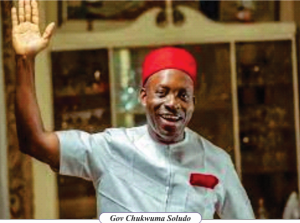 The state government has been fighting back and recording some successes which included the destruction of the homes of those found to be part of the criminality in the state.

When the state government came up with the security measures, it said they would be reviewed after two weeks. It is now two weeks and we expect that government would do as it said.

This expectation of a follow up act ion by the government stems from the fact that some of the government’s directives are yet to be implemented.

For instance, many filling stations and hotels in the state are yet to install CCTV cameras as directed and their body language suggests that they are not in any hurry to do so any time soon.

This is where the state government should come in and effect compliance without which future directives will be treated with disdain. We do not want a situation where the citizenry will begin to see government’s directives as mere barking without biting. There should be an appropriate follow up action by way of review and imposition of sanctions. Nothing should be spared by the government to ensure that sanity returns to the state.

We hope that the peace recorded last Sunday will continue and will be a sign that government is succeeding in the war against those making life miserable for the people of the state.