The Director-General, National Youth Service Corps (NYSC), Shua’ibu Ibrahim, has commended the patriotism of corps members engaged in the conduct of the governorship poll in Anambra State.

The DG also enjoined the Corp Members to remain impartial and perform their duties in line with established rules.

Mr Ibrahim gave the commendation last Saturday after monitoring the election in nine local government areas of the state. 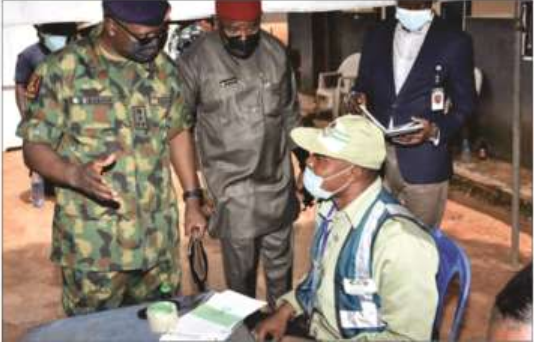 The commendation was contained in a statement issued preceding Saturday in Abuja by Adenike Adeyemi, Director, Press and Public Relations Unit of the NYSC.

‘The corps members had written their names in the annals of history, having contributed towards the entrenchment of a credible electoral process,’ the statement quoted the director-general as saying.

The DG also enjoined them to remain impartial and perform their duties in line with established rules.

In all the polling units he visited, the corps members informed him that the exercise was peaceful.

At Unit 003 Ward 007 in Awka South Local Government Area (LGA), an Election Observer, Nwadishi Faith Ossai, from the Centre for Transparency Advocacy, commended the DG for taking time to go round and see how the corps members were faring.

She also praised the corps members for their performance.

Mrs Ossai also said the corps members have been advised to be law-abiding and be of good conduct throughout their service year.

In a related development, the DG visited the Permanent Orientation Camp in Anambra State.

There, he sensitised them on the four cardinal programmes of the scheme and urged them to always obey the NYSC bye-laws and the rules in their places of primary assignments.

Mr Ibrahim urged the court members to serve as role models and leave good legacies at the end of their service.

‘Please take advantage of the orientation course to promote unity and teamwork and ensure that the spirit of NYSC lives in you forever,’ Mr Ibrahim said.

He advised them to study the felt needs of their host communities and initiate laudable projects that would add value to the lives of the residents.

Mr Ibrahim, however, pointed out that corps members were not expected to use their personal money to execute projects.

He said ‘they should rather reach out to people within the community for mobilisation of resources.’

The DG further enjoined them to take advantage of the Skill Acquisition and Entrepreneurship Development programme of the scheme, to empower themselves for self-employment.

‘Identify your talent, drive your vision with passion and commitment and the sky will be your limit’, he said.

He said the NYSC had partnered financial institutions such as the Central Bank of Nigeria, Bank of Industry, Heritage Bank and Access Bank, among others, towards supporting members with loans to finance their businesses.

He also said efforts are ongoing for the establishment of NYSC Trust Fund which would, among other benefits, make funds available to corps members for the actualisation of their business dreams.

He appealed to the corps members to avoid the wrong usage of the social media, advising that they should instead, deploy them for the promotion of national unity and integration.

He also warned them against unauthorised journeys and maintained that only state coordinators, and not their employers, could grant them permission to travel outside their places of primary assignments.

Me Ibrahim further warned the corps members to avoid boarding commercial vehicles by the roadside.

He stated that the management had partnered the Federal Road Safety Corps and transport unions to ensure they were provided with roadworthy vehicles while travelling.

‘If you have permission to travel make sure you take off from a designated motor park.

‘Do not travel at night; when it is 6 p.m., break your journey and continue the following day,’ he said.