The Governor Chukwuma Soludo led administration, through the Ministry of Agriculture, has concluded plans to establish processing centres across the state for oil palm and coconut fruits.

Disclosing this while taking delivery of some consignment of oil palm seedlings at the ministry’s premises, the State Commissioner for Agriculture, Dr Foster Ihejiofor, said government intended to maximize economic gains derivable from the produce.

‘We intend in the near future to deliberately instigate the establishment of processing centres across the state where first fruit bunches from oil palm and coconut fruits will be off taken and processed into various products for local use and export,’ Ihejiofor said.

He explained that once the seedlings planted this year started fruiting within the next 36 months, production sites for the catchment areas would be unveiled.

According to him, a total of 220,000 oil palm seedlings and 150,000 coconut seedlings would be distributed across the state this year. 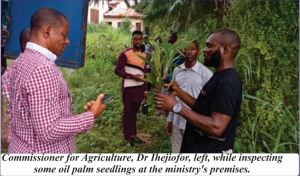 ‘This is because it took a while for the government to get budget approval and then commence the process of procurement and distribution to make sure that the ones supplied are planted to survive, having a bit of the rainfall to benefit from.

‘We had to cut down on volume for this year, but next year the deficit will be taken care of. The governor promised a million of palm seedlings to be planted across the state. Next year we are going to do the short fall for this year and then that of next year,’ Dr Ihejiofor added.

While calling on the people to key into the initiative for their economic sustainability and source of revenue for government, he urged wealthy individuals from the state to partner government to drive the project by investing in it.

Commenting on the distribution exercise, the Director, Agro Inputs/Growth Enhancement Support, Ministry of Agriculture, Lady Rosaria Ohaeri, underscored the importance of oil palm revolution which started during the regime of the late Michael Okpara.

She said the present administration under the watch of Prof Soludo had come to change the narrative from crude oil dependent economy to palm produce geared towards making the state a livable and prosperous mega city.

While enjoining stakeholders to key into the policy, she urged local government chairmen, presidents general, as well as village chairmen to ensure even distribution of the seedlings.

‘Government planned the way of distribution. We have a schedule and we work with the schedule. We work with stakeholders to make sure it gets to every community. We have mobilised the schools, churches, to have the seedlings planted in their compound.’

In a remark, the Vice President General, Ndikelionwu Welfare Association (NWA), Hon Ifesinachi Onwurah, described the government’s policy as laudable and called for its sustenance for the economic development of the state.