Eleven teams have qualified to move on to the second round in the maiden edition of Anambra Super 8  football tournament which kicked off last Monday, February 1.

The tournament which was organized by the Anambra State Football Association (AnSFA) was officially kicked at NEROS Stadium Nanka, sponsored by Ubaka Patrick Okeke  president of Aspire FC. 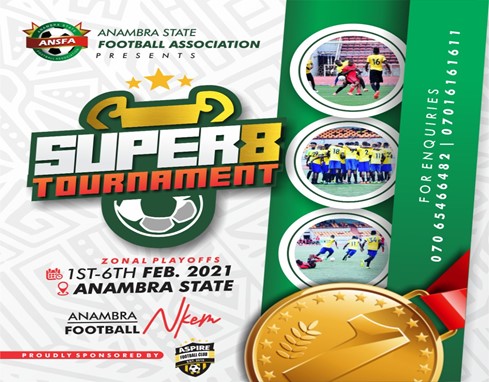 Some of the results of the matches played had Smithcity Awka FC defeating Global City FC Umunnachi with one goal while Rangels FC scored two winning goals against John Paul FC that scored one goal.

Recting, Prince Oliver Ndigwe, Chairman, Super 8 Organising  Committee, noted that the tournament was aimed at discovering talented footballers from the grassroots with a view to making them world champions.