Stakeholders in Anambra State have expressed fear about a likely outbreak of diseases in communities affected by flood, as displaced persons return to their homes.

Members of various communities in Awka North, one of the affected local government areas of the state, stated this during a meeting of UNICEF officials with stakeholders of flood-affected areas for the implementation of the post-flood intervention.

Also, the Water, Sanitation and Hygiene (WASH) Consultant (Enugu office), Mr Andy Nwanze, in his address said it organized the meeting to see how the organization could support those affected by the 2022 flood, especially now that the flood had receded and the victims were returning to their homes.

‘We are here to find out what happened during the flood, and how we can intervene to ameliorate the sufferings of the people. 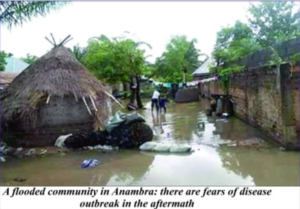 ‘What we learnt was that everything has collapsed, including residences, schools, hospitals and others, but we are more concerned about the contamination that their water has undergone and the outbreak of any diseases and how such can be prevented.

‘All the water sources are now contaminated and as we continue to condemn open defecation, flood has moved everything into the homes of those who have proper toilets and brought out their wastes.

‘Next week, we will begin to visit communities and quantify the loss and also funds and how it can be spent.’

The Awka Council chairman, Ucheze, thanked UNICEF for coming to their aid and described what they witnessed in their local government during the period of the disaster as something they had never witnessed before, even since he was born.

‘We are happy that you have come to intervene, and we are also appealing to other bodies to see what they can do to help our people. The flood has receded, and our people have gone back into the community, but some do not know where to start because they have lost everything,’ Ucheze said.

He added that the affected people also faced serious hunger because their crops, barns and farmlands had all been washed away.

For his part, Ezenyimulu said they were concerned about children and their health, disclosing that they just started measles vaccination to help protect children against the disease.

His words, ‘As the flood is receding and people are going back to their homes, we are worried about the likely outbreak of diseases. We have started vaccinating the people against Rota Virus to ensure that people remain healthy.’