Anambra Salutes Bishop Okeke of Nnewi, As He Retires at 75

Anambra State has paid a glowing tribute to the Catholic Bishop of Nnewi, Most Reverend Dr. Hilary Odili Paul Okeke, who retired at the weekend as the Diocesan Bishop on the attainment of the canonically mandatory retirement age of 75 years.

“Bishop Okeke’s Leadership of the Nnewi Diocese for 21 years is nothing other than inspiring and exemplary”, the State Commissioner for Information and Public Enlightenment, Mr. C-Don Adinuba, said in a statement in Awka, the State Capital on Tuesday.

“The Holy Spirit must have been involved directly in his selection as the first Bishop of the newly created Diocese, for he took the Diocese to unexpected heights in every field within a short period.”

The Commissioner lauded Bishop Okeke for not only growing the church under his care exponentially but also building schools and impressive health facilities, in addition to turning himself into an angel of peace and progress.

“He has over the years demonstrated eloquently the church is to serve both God and society,” declared Commissioner Adinuba on behalf of the State government. 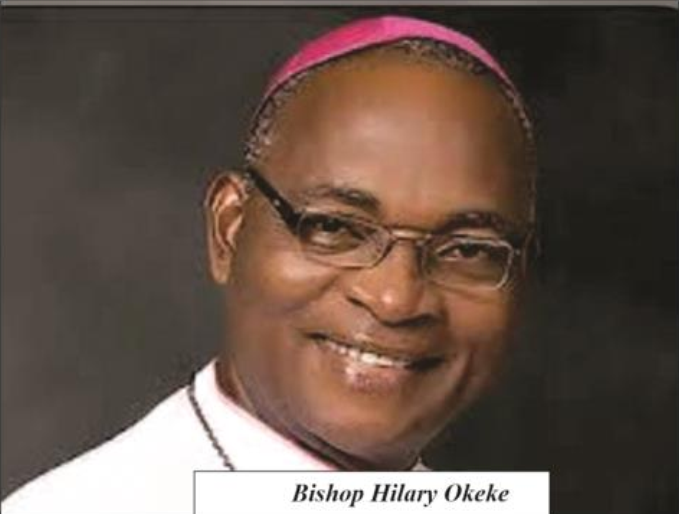 He commended the Bishop for his humility and eagerness to carry out every duty he was given since his ordination on April 20, 1974, regardless of the obvious difficulties.

“Shortly after his ordination by Cardinal Francis Arinze, who was then the Archbishop of Onitsha”, observed Mr. Adinuba, “he was sent to a town in Ogbaru Local Area to serve as both a Priest and a secondary school teacher when the town had no such basic amenities as pipe-borne water, tarred roads and public power supply.

“Still, he worked with tremendous cheer and inspired an almost countless number of people in the new secondary school and in his Parish.”

Commissioner Adinuba said that the Bishop’s personal virtues coupled with his outstanding brilliance enabled him to become the first member of his class to become a papal chamberlain, a Vicar General and, ultimately, a Bishop.

Describing Bishop Okeke as an internationally recognized canon lawyer and author, the Commissioner described as a thing of joy the fact that Dr. Okeke has been succeeded by Bishop Jonas Benson-Okoye, the Auxiliary Bishop of the Awka Diocese, whom he called “another brilliant canonist, theologian, philosopher and educationist”.

Meanwhile, Governor Willie Obiano has noted “that the Nnewi Diocese could not have been luckier with the appointment of Bishop Okoye, who is already well known in Anambra as an effective religious shepherd, as the new local ordinary.

“He cares about both the soul and the welfare of the people, which makes him a balanced and realistic spiritual Leader.”

The Anambra State Governor-Elect, Professor Chukwuma Charles Soludo, has also congratulated Bishop Okeke on what he called his exceptional Leadership of the Nnewi Diocese “for over 20 years.

“He towers in intellect as in spirituality, Leadership, research and writing.

“His colleagues and students still speak wonderfully of his tenure as the head of the Department of Canon Law at the Catholic Institute of West Africa (CIWA) in Port Harcourt, Rivers State, an affiliate of the University of Calabar.”

Professor Soludo stated that “Bishop Okoye is expected to exceed the impressive standards set by his predecessor, in line with the new spirit in Anambra State which seeks to enthrone global standards of doing things in the State.”