…Names Residency Villia, Street after Her at Removal of Mourning Cloth

Few months after the demise of his wife, Late Mrs. Gloria UkamakaOkafor, the Permanent Secretary of the Ministry of Public Utilities, Anambra State, Dr. Laz Okafor has dedicated a chapel, residency Villa and inaugurated a street named after the late wife in order to immortalize the amazon of Okafor’s dynasty.

The blessing and subsequent commissioning of the projects were part of the activities put together by the family to mark the end of their mourning and removal of the mourning cloth.

Also at the occasion, the saint Benedict Chapel, built by Dr. Okafor was also consecrated.

Fides gathered that the Ukamaka Villa, along with Gloria Ukamaka Okafor Street, adorned with street lights, were two significant projects to remind both the family, friends and community of the deceased’s legacies and her wrote to the family. 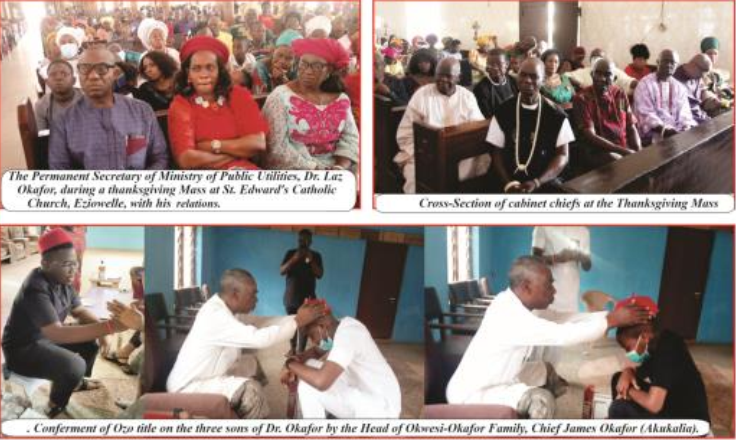 Earlier in a homily, an indigenous priest of the town, Rev. Fr. Clement Obi, tasked Christians to think and act positively in all they do. He stressed the need for to believe that with prayer, faith and humility before God, all their expectation and aspiration would come to pass.

He traced the history of Christ’s birth and how Herod tried to kill Jesus Christ which brought about the massacre of millions of children between the ages of two to day old. He emphasized the importance of effective utilization of God’s divine power to turn around any situation in life.

Inaugurating the Gloria Ukamaka Okafor Street and street light, the National President of Anambra State Association of Town Unions, ASATU, Chief Titus Akpudo, commended Dr. Okafor for immortalizing the legacies of his late wife and executing the project which he said would benefit indigenes of the community. He said that the street project would keep the memories of the deceased ever fresh in the mind of people.

He explained that individuals and groups have their respective roles to play in order the aid government effort in the development of their communities. He beckoned on people in the community to imitate the act put up the Perm Sec, saying that collective effort of people will facilitate more developmental projects.

He described Dr. Okafor as an illustrious son of Eziowelle Community whose actions and style of life had brought glory to the community and prayed for God’s blessings on the family.

While reminiscing on the legacies left by his late wife, Dr. Okafor described her as a good woman whose intention was always to render help to people and prayed that her soul continue to rest in the bosom of the Lord.

Dr. Okafor who appreciated God for his numerous blessings and faithfulness upon his family, thanked everyone who has supported the family in different ways during their mourning period and prayed for the blessings of God upon them.

Speaking to Fides, Dr. Okafor, said that the thanksgiving was to appreciate God for his numerous blessings and bring an end of the family’s three months mourning period and the subsequent removal of the mourning cloth.

He said that the celebration was also geared at appreciating God over his appointment as the permanent secretary, the graduation of his son and the conferment of chieftaincy title on the three sons,as the wife’s death had not presented opportunity for the thanksgiving to be held.

Public Utilities permanent Secretary, maintained that the chapel project was executed to fulfill the intentions of the late wife had while she was alive. He made that the residential abode and street after his wife was to keep her memories, saying that the wife touched lives during her life time.

He noted that the projects executed in honour of the late wife was in line with the vision which they shared before her sudden demise. He expressed optimism that the wife was better wherever she might be as she lived a charitable life.

He disclosed that the medical outreach carried out in her name would become an annual event. He recalled that the wife sacrificed her resources, freedom and time to ensure that the son achieved his aspirations of becoming a medical doctor, saying that the family hoped to give back to society through the annual medical outreach to be sustained. He noted the family would also sustain the charitable life style of reaching to the poor as done by the deceased even on the hospital bed.

He said that more projects would be executed in the honour of the late wife and revealed that a foundation would flag-off in the name of the late wife, saying that it would enable more people to partner with the family for more humanitarian projects.

Highpoints of the event were special thanksgiving, commissioning of the projects built to immortalize late Mrs. Okafor and rendition of special prayers at her grave side.