The meeting which was held in Awka had in attendance 330 WDCs chairmen from across the state’s 21 LGAs.

The Executive Secretary, ASPHCDA, Dr. Chioma Ezenyimulu, said the essence of the meeting was for the WDCs to be better informed about the Basic Healthcare Provision Fund (BHCPF) programme.

She explained that the BHCPF was one percent of the consolidated revenue of the federation as contained in the National Health Act, 2014 which main aim was to provide Universal Health Coverage to Nigerians through the one-PHC per ward approach.

‘The PHC is the first port of call for health in the community and as such must be accessible and affordable. BHCPF is premised on one PHC per ward which must be functional,’ she said. 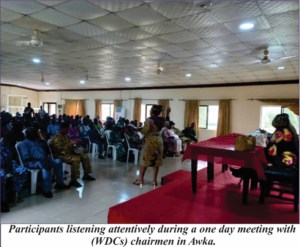 According to her, the BHCPF comes quarterly and it has rules and regulations guiding it which all have to abide by for the progress of PHCs.

Her words, ‘For each quarter the BHCPF comes, there should be a business plan for its use. This is the reason it is essential for the WDCs and Officers-In-Charge (OICs) of facilities to work harmoniously in presenting projects that would be beneficial to the PHC and the community.

‘The needs of a community may differ, that is why each community needs to articulate their needs carefully and draw its business plan for what the fund will be used for.

‘It is not a must that all a community needs would be accommodated in one quarter; some needs could be shifted to the next quarter. We all have one common goal; Universal Health Coverage (UHC) which is to better the health of citizens in our communities.

While noting that another essence of the meeting was to discuss how to make Primary Healthcare Centres more accessible in communities, she urged the WDCs to sensitize the people living in the communities to visit the PHCs regularly.

‘This can be for medical check-up such as blood pressure measurement, blood sugar (Glucose) measurement, ante-natal care Immunization or treatment of minor illnesses,’ she explained.

She said that knowledge was power and directed that copies of the BHCPF handbooks be distributed to each WDC chairman so that they could study it carefully to know their roles and responsibilities.

She then urged the WDCs to come up with ideas and solutions that would help move PHCs forward.

The Director, Community Health Services Department, Dr. Frank Umeh, urged the WDCs to air their thoughts on ways to move PHCs forward as it would aid to bring development to their communities as, according to him, a healthy mind was a wealthy mind.

He noted that the meeting was necessary as some of the WDCs did not understand the essence and importance of the BHCPF.

He urged them to also ensure that they went through the handbook on BHCPF as it would throw more light on their questions and concerns as regards the fund.

Dr Umeh however emphasized the need for WDCs and OICs to work harmoniously to aid in attracting progress to the PHCs in their respective communities.

Mrs. Queeneth Ogueri, a representative of the National Primary Healthcare Development Agency (NPHCDA), while noting that the BHCPF was a great opportunity for communities to develop their PHCs, urged the WDCs to make good use of it.

She emphasized that the programme cut across all the states of the nation.

‘Its aim is to have Universal Health Coverage which states that every citizen in the world, Nigeria inclusive, should have quality health services and should also be protected from financial hardship or barrier in accessing health issues,’ Mrs Ogueri stated.

Mrs Ogueri who was in the state to monitor preparations on the upcoming Measles Campaign, also sensitized the WDCs who are gatekeepers in their communities, to encourage mothers/caregivers to participate in the upcoming vaccination exercise.

In a vote of thanks, the WDC Onitsha North LGA, Mr. Eugene Emembolu, commended the Agency for organizing the programme, noting that it exposed them to a lot of things concerning the BHCPF.

He assured that they would continue to put in their best to ensure the success and growth of their health facilities, as well as good health for their people.