The Anambra State Police Command has announced the arrest of nine suspect electricity mast vandals and the recovery of two vehicles suspected to have been stolen or abandoned.

The state police image maker, DSP, Tochukwu Ikenga, who disclosed this in a press statement made available to Fides which he signed, said the suspects were arrested around 3am last Sunday, following a tip off. 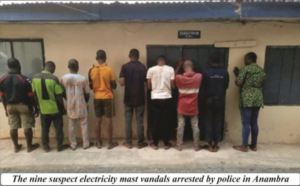 The suspects were said to have confessed the level of their involvement in the act, while the police said they would be charged to court at the conclusion of investigations.

‘Given the above, the Command invites anyone or group looking for any of the vehicles as highlighted above, to come to the Office of the Command Public Relations Officer, Awka, with valid proof/evidence of ownership of such vehicles for verification and possible collection, please,’ the statement read.