The leadership of the Anambra State Executive of the People’s Democratic Party, PDP, is still under Ndubuisi Nwobu. Nwobu who disclosed this to newsmen at the state secretariat of the party at Udoka Estate, Awka, last Thursday, said the clarification became necessary due to an Abuja High Court judgement obtained by one Samuel Anyakorah, June 9, which reportedly returned Mr Ejike Oguebego as the chairman of the party in Anambra. 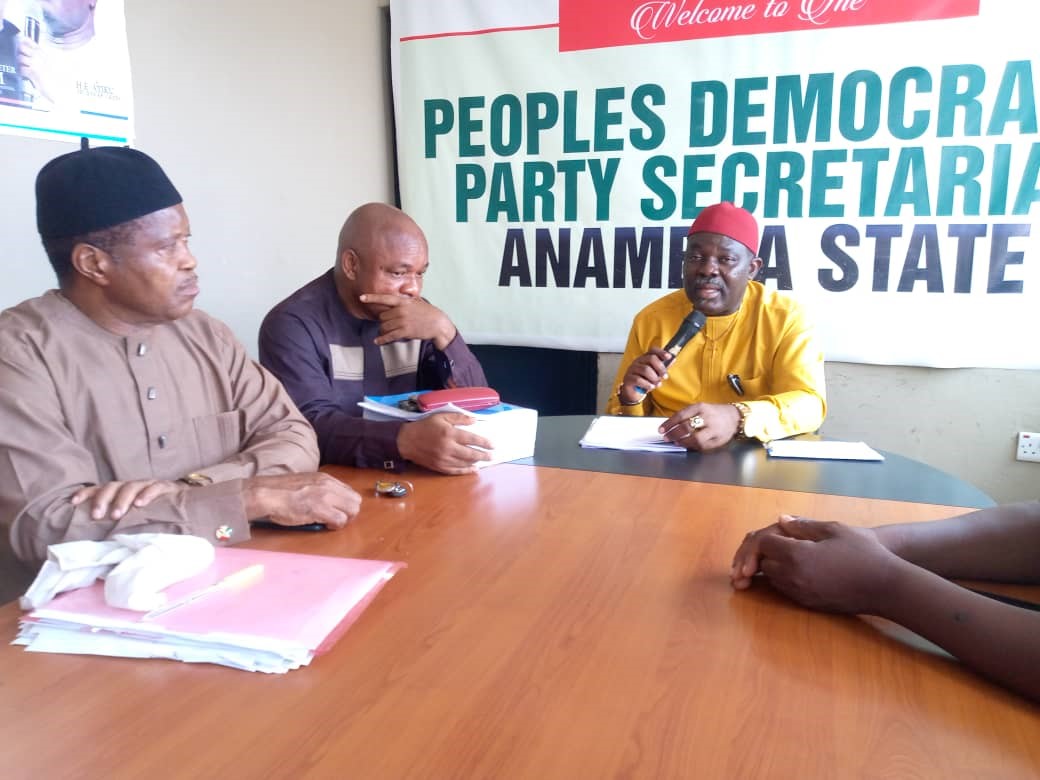 Chairman of Anambra State Chapter of the People’s Democratic Party, PDP, Chief Ndubuisi Nwobu, with microphone, addresses journalist at the PDP secretariat, Thursday, on latest developments in the party. He is flanked on his immediate right by the party’s state secretary, Bar Okoli Akirika. The state’s zonal chairman, central, C.C. Okeke, 1st left, watches on.

Nwobu said no court of coordinate jurisdiction could vitiate the earlier and subsisting judgement in favour of the Nwobu-led exco by a Federal High Court in same Abuja.

In a press statement he signed in reaction to the High Court judgement, Nwobu said there was a valid and subsisting judgement protecting the leadership of the party under him in the state. He said the judgement his side obtained had not been set aside and remained binding on all parties until set aside by an appellate court.

He said the judgement in Suit No: CV/774/2021 between Samuel Anyakorah v PDP and two others purportedly, according to him, setting aside the earlier judgement of Musa, was of no substance and did not avail the plaintiffs of any right as it was inconsistent with a valid judgement of a court of coordinate jurisdiction.

‘The same party that filed this suit abandoned its appeal on the earlier judgement of Hon Justice Musa,’ Nwobu said, while appealing to PDP supporters in the state, as well as aspirants, to go about their political activities without let or hindrance as the recent court judgement could not stand.

Nwobu said the national leadership of PDP would soon come out with a decision on those he described as fifth columnists in the party and wondered how there could have been a court sitting when the courts were on strike, even as he said that the same Oguebego, purported to be the leader of party after the judgement, was still with the mainstream PDP.

‘The political merchants won’t derail us. We are focused on taking over the state and all our activities remain as scheduled, including primaries and congresses,’ Nwobu said.