By Jude Atupulazi and Chioma Ndife

The secretariat of the Anambra State Chapter of the People’s Democratic Party, PDP, was abuzz, Saturday, February 13, when a top gubernatorial contender for the November 6 election, Mr Val Ozigbo, donated eight brand new vehicles to the party as Valentine Day gift. 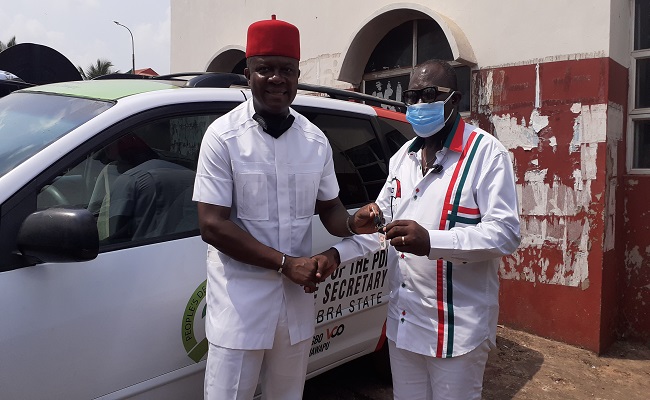 Addressing the beneficiaries and other participants at the event attended by all the 21 local government chairmen of the party, Mr Ozigbo assured the party leadership in the state of victory in the 2021 election if he won the party’s gubernatorial ticket.

He expressed confidence that with the likes of Mr Peter Obi, Senator Ben Ndi Obi, Senator Joy Emordi, Iyom Josephine Anenih, and other party stakeholders, he would emerge the consensus candidate that would take over from Governor Willie Obiano in March, 2022, even as he called for sacrifice by all to ensure victory for PDP.

‘I donated this vehicles as part of the love I personally have for PDP and to make the party more popular in the midst of other contesting political parties in the state,’ he said, urging other party supporters who had benefited in one way or the other to emulate his gesture to keep the party moving.

The former Transcorp boss appealed to the beneficiaries to make use of the vehicles for the purposes for which they were bought.

In his reaction, the State Chairman of the party, Chief Ndubisi Nwobu, said the gesture was a demonstration of love for the party.

Nwobu said the party needed a strong candidate like Mr Ozigbo to win the election.

He assured him that the vehicles would be used wisely to achieve the guber election victory.