Recently, the governor of Anambra State, Prof Chukwuma Soludo, proclaimed that Anambra had become the safest in Nigeria and vowed to continue to ensure that criminal elements in the state were taken out. That was during a press conference in his country home, Isuofia, earlier in the year.

He called for more checkpoints in the state, saying that through the proactivity of security agents, his government had been able to take out criminals hiding in various camps in the state.

He had continued, ‘Nine months ago when I came into office, I announced that security, law and order are about the first key agenda. The difference as at now is like the difference between day and night.

‘Before now, eight LGAs were taken over by bandits, and today those LGAs have been liberated and all the bandits taken out of their camps and several of them have fled the state, while those who remained have been degraded.

‘We are trying to keep our state safe, but you will never have a crime free state. No state in Nigeria is safer than Anambra today.’

While we agree with him that no state will ever be totally free from criminality, we however disagree about his assertion that Anambra had become the safest state in the country.

Indeed, about a week after his assertion, a police station was attacked in Ihiala and burnt, followed a week later by another attack and burning of a police station in Umuchu. A few days before that, four men had been shot dead in the Nodu Area of Okpuno in Awka Capital City in a cult related attack. That was apart from other suspected cult killings in other parts of Awka and the killing of the President General of Obosi Community. In between and after, there had been cases of kidnappings across the state. 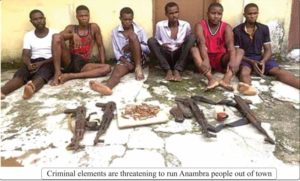 Indeed, a state considered safest will not be experiencing such regular cases of criminality. It has become so bad that certain places in the state have become no-go areas.

Yet, we appreciate the gains made by the present government in fighting crime. We consider such efforts as genuine and bold, even though they have not been enough.

Why then has the task of securing Anambra State become such a daunting one? Are there people or communities who are sabotaging the efforts of the state government? Why has Anambra suddenly become the hotbed of criminality?

It is instructive to note that in neighbouring Ebonyi State, the core problems being experienced in Anambra State are not being experienced there. Findings by this paper revealed that cases of kidnapping, diabolical activities by non-state actors and even the Monday sit-at-home, have either been eradicated or maximally reduced. So why is Anambra different?

One may conclude that criminals chased away from Ebonyi and, perhaps, other neighbouring states, have found a safe haven in Anambra State. This brings up the need for Anambra to work with neighbouring states in fighting crime. A situation where criminals chased away from Anambra return after being chased from other states makes nonsense of every effort to crush them.

We are therefore reiterating our call to the governors of the Southeast States to work together to eradicate criminality in the zone as individual efforts have clearly failed to achieve the desired results. Communities should also be deeply involved since the criminals live among them; whether in their bushes or right within them.

We call for a more brutal response to the menace posed by these pernicious elements and that should include wielding the axe against any community found wanting in matching government’s efforts in fighting criminality.

The security agencies are also urged to be more proactive, rather than reactive. Patrols should also be encouraged, rather than just mounting of road blocks which makes them play into the hands of the criminal elements who, knowing where such road blocks are, often catch them off guard.

Anambra, just like most states in the Southeast Zone, has been almost overwhelmed by criminality; a development that is making many people to shun coming home or to perform funerals and traditional marriages outside their communities. That is not how it should be. Everyone should be involved in the business of securing the state before we are sacked from our homes.