As this year’s Christmas celebration kicks off, the Government of Anambra State has directed masquerades to take their stuff to village squares rather than on major roads to avoid disrupting traffic. This directive was contained in a press statement signed by the state’s Commissioner for Information, Sir Paul Nwosu, made available to Fides, December 21.

Fides reports that hoodlums often use such chaotic situations to rob passengers of their possessions like mobile phones and money, apart from causing traffic jams.

This is part of efforts by the Anambra State Government to ensure free flow of traffic across the length and breadth of the state at a period when many people are expected to return for Christmas and New Year celebrations.

The statement read, ‘The government is therefore calling on all masquerade enthusiasts and followers to restrict their entertainments to their respective village squares, and not the highways and major roads where they are likely to cause traffic gridlocks. 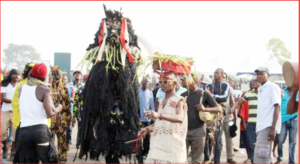 ‘The same warning goes to owners of beer parlours who, especially at this time, are in the habit of annexing major roads as parts of their business premises.
Those caught flouting this directive will be arrested and sanctioned accordingly.

‘Our season’s pomp and merrymaking should not constitute discomfort to passers-by.

‘In the light of the above, Presidents General are urged to advise those that are concerned in their various communities.’

Such directives, Fides recalls, had not been complied with in the past, owing to government’s failure to enforce them; just as the usual police warnings against fireworks are always not obeyed. Will this latest government directive work?