The Anambra State Government through Ministry of Youth Empowerment and Creative Economy, has trained over 126 youths on the One-Youth-One Skill Empowerment Programme of Governor Willie Obiano’s Administration in the state.

Fides gathered that the initiative, which was run by the Anambra State Ministry of Youth Empowerment and Creative Economy was launched in 2018 and was aimed at empowering youths to be financially independent. 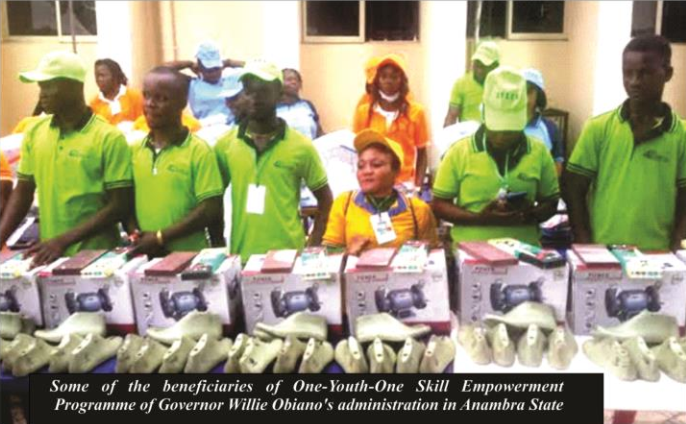 The State Commissioner for Youth Empowerment and Creative Economy, Professor Theresa Obiekezie, who made the announcement during the graduating ceremony of the 5th Batch of the training programme, said that about ten thousand youths had so far benefited from the programme with a Trade Test Certificate from the Federal Ministry of Labour and Employment and start up packs, implemented by the state Government under Willie Obiano.

According to her, ‘I want to use this ceremony to announce to you all that this 5th Batch of One-Youth-One-Skill Programme might be the last for this administration. As you all know, in one month’s time, the present administration will come to an end.

‘Though the administration still has a training programme called ‘The Youth Apprenticeship Programme’, we have not closed that one. I hope and believe that the incoming government of Professor Charles Soludo, will continue from there and more.’

She thanked the governor for the huge success of the programme.

The graduates were trained at three different centres in the three senatorial zones of Anambra State.

Fifty-nine of the trainees were also empowered with start-up packs during the ceremony.

Presenting the equipment to the beneficiaries, Prof. Obiekezie said the intervention was in line with Governor Willie Obiano’s promise to empower ten thousand youths in the state.

She advised the beneficiaries to make proper use of the equipment and to remain resolute and creative through the rough edges of entrepreneurship.

In her remarks, the Permanent Secretary in the Ministry, Mrs Louisa Ezeanya, extolled the governor for the scheme which is the first of its kind, noting that its focus on youths was critical to the overall societal development.

Some of the beneficiaries of the programme, Uwabunkeonye Clara, a student of the Federal Polytechnic Oko; Chiamaka Chikeluba and Chigo King, assured that they would make diligent efforts to grow their chosen enterprise and thanked the State government for what they described as a huge opportunity.

The programme also featured exhibition of the trainees’ products, presentation of certificates and start-up equipment to the successful trainees.