The exercise was on the orders of the state governor, Prof. Chukwuma Soludo, that all unapproved buildings at the old airport site be demolished.

The leader of the task force and the chairman of Anambra State Physical Planning Board, Barr Chike Maduekwe, regretted that those he referred to as miscreants were taking over government land and selling to developers.

Barr Maduekwe said it was the prerogative of government to use or reallocate its land for other uses. 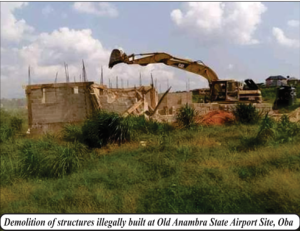 ‘This is government land; an old airport site, and as such, no individual or group has the right to parcellate the land. The full compensation for this land has been paid. So the state government will utilize it. Unfortunately, some miscreants are demanding a whopping sum of thirty million Naira from the developer in what they termed the ‘development levy’, he said.

Barr Maduekwe warned that the state government would no longer tolerate any unapproved action on the said land.

‘Anybody developing any structure here will face the full wrath of the law as such building will be demolished.

‘The general public should desist from buying land here or any other government land, for such practices will not be tolerated,’ Barr Maduekwe warned.