Anambra Govt, PDP, Condole with Ozigbo Over Death of Father

The Anambra State Government and the People’s Democratic Party, PDP, in the state, have expressed their condolences to the governorship candidate of the party in the last governorship election, Mr Valentine Ozigbo, over the death of his father on January 2.

The Anambra Government in a condolence letter signed by the state’s Commissioner for Information and Public Enlightenment, Mr C. Don Adinuba, condoled with the Ozigbo Family of Amesi in Aguata Local Government Area.

Also, the State Publicity Secretary of PDP, Mr Nnamdi Nwangwu, also condoled with Ozigbo on behalf of the party.

Adinuba in his letter, said, ‘Chief Andrew Ozigbo is distinguished by high principle and strong commitment to the public good.

‘When the result of the November 6 Governorship Election came in and it was clear that his son was losing by a wide margin, Chief Ozigbo asked the PDP candidate to accept the outcome of the poll even before the official announcement and congratulate the winner, Professor Chukwuma Soludo of the All Progressives Grand Alliance (APGA). 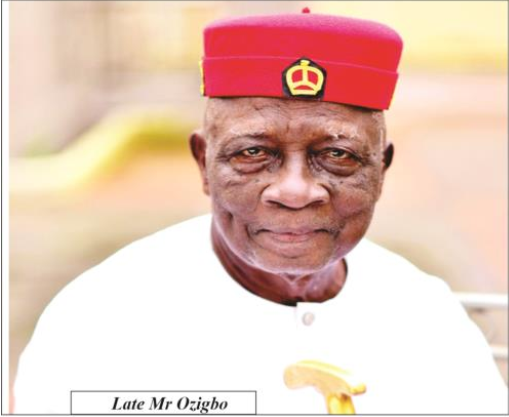 ‘Despite his advancement in age, Chief Ozigbo always encouraged his son to play by the rules, eschewing all forms of violence and bitterness and fraud.

‘He was always conscious of his role and status as a foremost educationist and a devout Christian who attended the morning Mass daily for much of his life.

‘Chief Ozigbo represented the typical Anambra spirit: a strong determination to excel. He was, for instance, an elementary school headmaster which was a big position in those days, yet he was not satisfied with his status in life.

‘Through determination, further studies and continuous improvement, as well as drive, he ended up a secondary school principal.

‘He inculcated strong values in his family of three girls and four boys, including Valentine Ozigbo, his last child.

Meanwhile the PDP in the state said, ‘Every mortal must one day answer the call to the great beyond. We are consoled that Chief Andrew Nwafor Ozigbo, a great leader, was a mentor to many successful persons in and outside the state, the journey of life is not about how long but how impactful the departed hero will live long in the memory of those he positively impacted,’ Nwangwu noted in the statement.

He said that the entire members and leadership of PDP in Anambra State sympathize with Ozigbo and his family at their moment of grief.