The Anambra State Government, through the Ministry of Environment, has commemorated this year’s World Environment Day with a call on Ndi Anambra to care more about their immediate environment.

Odimegwu who stated that people must adopt environmental friendly habits for their general wellbeing, even as he described the theme for this year’s celebration, “Only One Earth”, as apt, stressed the need for intervention measures by every stakeholder to save the earth planet.

‘This calls for collective transformative actions on a global scale to celebrate, protect and restore our earth planet, and encourage everyone everywhere to live sustainably and take actions, responsibility on the climate crisis.

‘Anambra State is facing serious environmental health and environmental degradation and serious climate change challenges. This is the time to take up the collective and individual responsibility by avoiding actions leading to pollution and degradation,’ Engr Odimegwu said.

The Environment Commissioner reiterated the commitment of the present administration to ensure clean, greener, planned and sustainable cities in the state and called for public support to realize the objective. 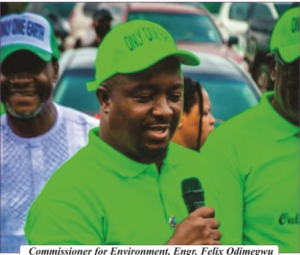 In a remark, the Permanent Secretary in the Ministry, Dr Emma Udeh-Akpeh, urged all and sundry to take back the environment from negative indulgences and degradation for a healthy living.

Contributing, Mr Michael Ivenso of the Nigeria Erosion and Watershed Management Project (NEWMAP), noted that an environmental sustainability and control manual had been created for public enlightenment on physical planning laws and related matters.

Marking the symbolic occasion at the Governor’s Lodge, Amawbia, where the Governor, in company of his wife, Mrs Nonye Soludo, and other top government officials, planted a tree to commence the one million tree planting exercise every year in the state.

Speaking at the occasion, Governor Soludo said trees were being cut down indiscriminately without replacement and warned that society was being unkind to nature. He added that if the society did not befriend nature, it would take its toll on the people.

‘Trees are being cut down without replacement. We are being unkind to nature. If we don’t befriend nature, it will take its toll on us.

The Governor also emphasized that part of his manifesto was the promise that government was going to mobilize Ndi-Anambra to plant one million trees every year to boost a robust, clean and green environment across the state. He added this revolution would also help in fighting the perennial cases of flooding and erosion control, which, he observed, were some of the existential environmental threats in the state.

Governor Soludo also revealed that his government was already working tirelessly to keep the cities and environment clean through proper disposal of refuse/waste.

He added that open disposal of refuse in the public space would henceforth be prohibited, saying that a system was being worked out where refuse were picked up directly from people’s houses and taken to designated dumpsites. He said the process was on-going and was part of the larger picture to keep Anambra State clean and green.

Earlier, the Commissioner for Environment, Mr. Felix Odimegwu, stated that the symbolic tree planting was also to Flag Off one house, two or more trees exercise in Anambra State.

Some government functionaries witnessed the event.