The Anambra State Government has commenced intervention work on the failed portions of the old Enugu-Onitsha Expressway.

The failed spot, which has constituted a nightmare for travellers, is located at Amansea, Awka North Local Government Area.

Severally, commuters have been trapped on the spot, while many have had cause to spend the night in the area, especially during festive seasons. 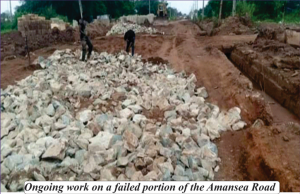 The Anambra Government commenced work in the area last two weekends. The bad portion spans about 350 meters at different locations along the same stretch of road.

Fides reports that the job commenced with the desilting of drainages on both sides of the road, while heavy stones are currently being used to fill the failed portions.

An official of the Anambra Road Maintenance Agency, the agency responsible for the rehabilitation, Engineer Azuka Egwuatu, said Governor Chukwuma Soludo had directed that the road be made motorable within the shortest possible time to alleviate the suffering of the road users.

Egwuatu said, ‘We’ll complete the work within four days since we have placed slumps and presently on stone base, after which we will prime and asphalt.

‘Currently, we’re moving in to start work on Nkpor-Umuoji Road, all courtesy of Governor Soludo.’