Following the failure of the Anambra State Government to do palliative work on the failed portion of the Amawbia Express, the State Command of the Federal Road Safety Corps, FRSC, has embarked on doing some patch work on that section by heaping laterite and smoothening same on the road. The Anambra State Sector Commander of the corps, Mr Adeoye Irelewuyi, said it was aimed at easing the traffic problem usually encountered there ahead of the peak yuletide period. 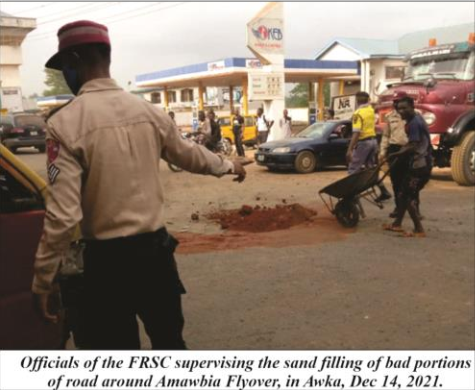 A press statement made available to Fides which was signed by DRC Margaret B Onabe, AG Sector Public Education Officer, on behalf of the Sector Commander Anambra, noted that the potholes under Amawbia footbridge had been causing a lot of traffic gridlock and obstruction.

The report stated, ‘As a contribution towards the free flow of traffic, free road traffic crashes, and the safety of motorists, the Sector Commander, Corps Commander Adeoye Irelewuyi, deemed it necessary and pertinent by making provision and supply of laterite for the immediate refilling of all the potholes under Amawbia footbridge yesterday (Tuesday), 14 December 2021, which has started and supervised by the Sector Head of Operations, DCC Okora Awassam.

‘The police, ATMA and many motorists were expressing high level of appreciation to FRSC.’

While briefing the press earlier on the activities of the corps, the Sector Commander had disclosed plans to work with stakeholders to fix failed portions of roads to aid the free flow of traffic during the yuletide.