The workshop tagged, ”Skill Acquisition: A Tool for Liberating Women from Economic Abuse”, held at St. Patrick’s Cathedral Hall, Awka, last Wednesday, August 31st. It witnessed the presence of over 150 women drawn from various local government areas in the state.

Fides gathered that the organization was established to empower young women and girls to discover their full potentials and maximize them. 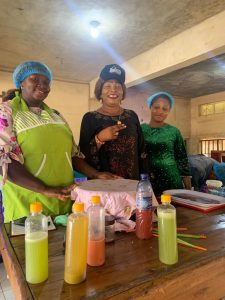 Speaking to Fides, the organizer, Chiamaka Angela Okparaojiego, said that the idea behind the skill acquisition programme was conceived when she graduated from the university. She said that the idea was to empower women and assist them to develop skills in order equip themselves for the future.

She noted that it was important for women to develop their potentials and become skillful, saying that more was needed other than being certified as a graduate.

The organizer said that being skillful would assist women to become financially independent and regretted that most young women while trying to solve family problems rushed into marriage without understanding their capabilities.

She said that the NGO hoped to empower over 250 persons skillfully and maintained that she would be fulfilled to see that women became liberated after the training.

Speaking to Fides, the keynote speaker, Chidimma Okeibe, explained the various types of abuse and stated that it was important for women to be skilled in order to escape from their abusers and become a voice to be reckoned with.

Okeibe who was the last woman standing in the Season 12 of the Gulder Ultimate Search, beckoned on women to desist from putting themselves in conditions that would endanger their lives, saying that they could do so by becoming financially independent.

She encouraged the participants to take the training seriously and practicalize what they had been taught in order to become better people who could contribute qualitatively to society.

Some of the participants, Adaobi Asiegbu and Chisom Nwani, while thanking the organizer, said they would deploy the acquired skills and become financially independent.

The participants were trained in cake, peanut, smoothie/fruit juice, yoghurt, asun, perfume and liquid soap making, as well as in the art of makeup and gele tying.