The chairman of Anambra State Football Association, ANSFA, Mr Chikelue Iloenyosi (General), says his love for the state and passion for the round leather game are the forces driving him to deliver.

Iloenyosi who stated this while celebrating 100 days in office said he was out to turn things around for football in the state. 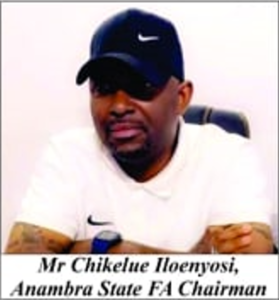 His words, ‘I love my state and as one who played the game, I have that passion. I want to give back to the system. I am happy we have achieved so much in the last 100 days. So many people have sent words to say they love what we are doing. I give God all the glory. All the accolades we are getting would encourage us to do more,’ he said.

The ANSFA boss said the unveiling of grassroots football which, he said, attracted over 11,000 kids, was one of the steps taken to catch them young.

He said the FA would take the game to schools, to traders doing business in the state and to every community.

‘As we speak, there are over 11 football competitions going on in the state and we are planning several other competitions for next year, including the Governor’s Cup. What we are doing is to make Anambra become synonymous with football,’ Iloenyosi concluded.