The Deputy Governor of Anambra State, Dr Nkem Okeke, has eulogized the dexterity, focus and innovative mindset of the Head of Department of Economics, Nnamdi Azikiwe University Awka, Dr Ebele Nwokoye, and her team.

This, Dr Okeke stated, shortly after receiving an award of excellence in recognition of his selfless service to humanity by the department during the third staff seminar and first alumni homecoming of the department at the department’s hall, Alhaji Ishiaku Umar Building.

According to the Head of the Department of Economics, Faculty of Social Sciences, Dr Ebele Nwokoye, the honour was in recognition of the contributions of the Anambra State Deputy Governor, Dr Okeke, throughout his period in the department as the HoD before his political appointment. 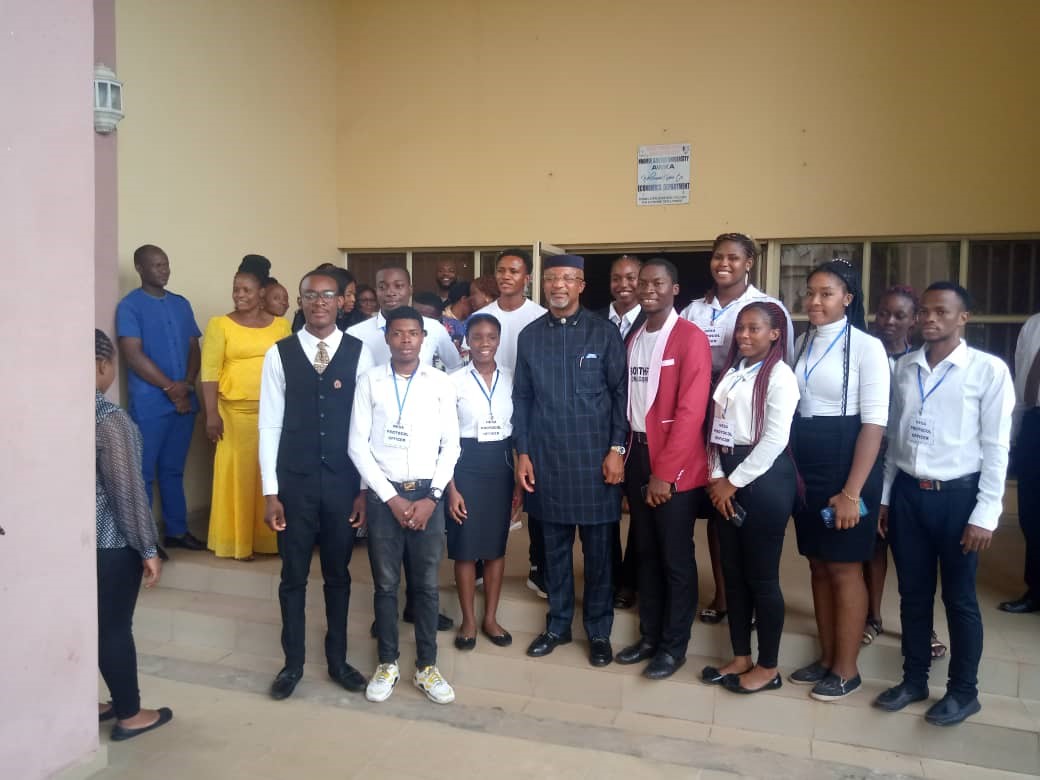 Anambra Dep Gov, Dr Nkem Okeke, 4th from left, poses with some students of the Dept of Economics, Unizik, after receiving an award

The Anambra State Deputy Governor who appreciated the department for the recognition, harped on the need for parents to invest in their children’s academic life, noting that quality education was the best weapon to conquer the world. He pointed out that it was the debt that every parent owed their children.

Dr Okeke, while saying that Nigeria’s problem was not restructuring but poor leadership, called for leadership with sincerity, purpose, and selflessness, across all levels.

In his contribution, the Dean Faculty of Social Sciences, Professor Uche Nwogwugwu, commended Dr Okeke for being a good representative of the department and the institution at all times; even as he encouraged the students to be serious with their studies in order to be relevant in time to come.

Earlier In her address, the Head of Department of Economics, Nnamdi Azikiwe University, Awka, Dr Ebele Nwokoye, disclosed that they organized the event to recognize excellence that the Deputy Governor represented, and also to equip the students with knowledge that would make them employers of labour and not job seekers on graduation.

She pointed out that unemployment, extreme inequality, social exclusion, natural and man-made disasters, poverty and hunger, were danger signs, adding that a free society which could not care for its numerous poor citizens was a disaster waiting to happen; hence the decision of the Department of Economics to take positive measures aimed at proffering solutions to welfare issues.

She requested for an extension of the existing structure to accommodate the increasing number of staff and students.

‘Is it possible to have a lecture room built upon the Alfred Marshall Lecture Room so that we can have an extra lecture room, making it a total of four? His Excellency Sir, recall that this building is a donation to the Department of Economics by Alhaji Ishiaku Umar. Is it possible for us to have an extension so that it can accommodate our increased numbers of staff and students? For now, all I can say is that we are in good hands.

The event which featured a series of paper presentations that focused on equipping the students with knowledge that would make them become self-reliant on graduation, also had in attendance the Branch Controller, Central Bank of Nigeria, CBN, Awka, Mr Benedict Maduagwu; Head of Mass Communication, Unizik, Professor Chinwe Uzochukwu, among others.

The event which kick-started with tree planting, was also the first alumni homecoming of the Department of Economics.