Various communities in Anambra State and beyond on Saturday, 1st October, 2022, converged on Ayika’s family compound in Orofia Village, Enugwu-Ukwu, Njikoka LGA, Anambra State, to celebrate the impactful and phenomenal life of the late Mrs. Maria Ayika amidst accolades. 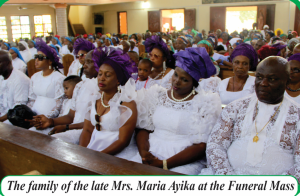 The late Mrs. Ayika, the mother of Rev. Fr. Philip Emenike Ayika, among other 7 children, was committed to mother earth after a concelebrated burial Mass led by the Chief Shepherd of Ekwulobia Diocese, His Eminence, Peter Cardinal Ebelechukwu Okpaleke and his Awka counterpart, Most Rev. Paulinus Ezeokafor, alongside over 20 priests as concelebrants at St. Theresa’s Catholic Church, Enugwu-Ukwu.Cardinal Okpaleke was represented by vicar general, Catholic Diocese of Ekwulobia very Rev. Fr. Prof. Anthony Chigboka while Prof. Bishop Ezeokafor was represented by the immediate former Chancellor of Awka Diocese, Rev. Fr. Francis Chidiume.

The late Mrs. Ayika, nee Ibik, nicknamed Nwachinemelu, by all and sundry due to her good deeds, died in the United States of America of ill health at the age of 77. The deceased until her death was a member of the Christian Mothers Association, Legion of Mary and other religious groups where she championed the cause of propagating God’s gospel.

In his homily, Fr Amegwu reminded the faithful that their earthyly existence was to prepare them for heavenly bliss and urged them to strive in all they did to earn heaven on the last day. He described death as a necessary end that awaited everyone on earth and advocated for the use of one’s resources, time and talent in helping others in life. 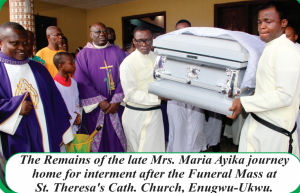 Speaking on the phenomenon of death, Rev. Fr Amegwu explained that Christians, at the death of beloved ones, were usually consoled through their faith that life had no end but changed and that everything in life was billed to expire at a particular point.

The Catholic clergy queried why people often cried at the burial of loved ones bearing in mind that people died in order to resurrect through Christ, saying that everyone should bear in mind that they would die someday. He identified Christ as man’s final destination and urged all to obtain what he called the visa of heaven, knowing that there was time for everything. 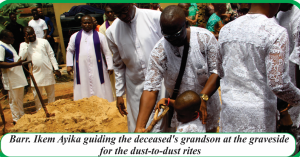 Fr Philip Ayika, the deceased’s son, thanked all who came to share in their moment of sorrow. He described his mother as the strongest woman ever known to him and thanked her for the moral and sound training which she provided him and his other siblings which made them responsible individuals in life.

The children of the deceased, through their brother, Barr. Ikem Ayika, eulogized their mother as a true Christian, a compassionate fellow and a role model who had led people to the right path in life. He noted that the death of his mum created a deep and empty hole in his heart as they enjoyed a unique relationship and bonded well during her life time. 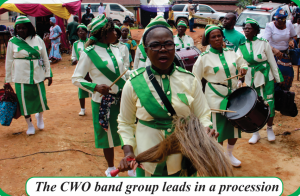 Barr. Ayika who admitted questioning God at the break of the news of his mother’s death, said he would have willingly allowed God to take his own life in the place of his mother’s if he was presented with such a choice. He described the mother as a good Christian who lived a well fulfilled life and was able to train her children effectively due to her strong disposition to life.

The burial attracted the presence of important personalities such as the member representing Anaocha/Njiokoka/Dunukofia Federal Constituency, Hon. Dozie Nwankwo; member representing Njiokoka II Constituency in the Anambra State House of Assembly, Hon. Pete Ibida; Captains of industry, among others, who came to condole with the bereaved family.