Anambra State Commissioner for Social Welfare, Children and Women Affairs, Lady Ndidi Mezue has visited the Nwafor Family of Imeohia, Ururo, Umunze, Orumba South Local Government Area, where a bungalow being erected by a stepson for his 94-year-old step-mum was reportedly pulled down by other stepsons and their accomplices.

The visit followed a directive by the State government to immediately intervene in the issue, to ascertain the reasons for such heinous action and seek timely solution.

Just over a week ago, social media was awash with gory scenes showing images of a broken down house which had gone as far as roofing stage.

Other amateur footages showed a 98-year-old widow in deep grief and loud wails, while concerned relatives and friends were trying to console her. 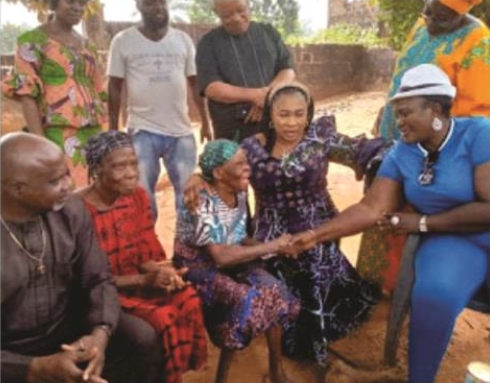 The reported stories accompanying the footages threw social media users and concerned observers into serious exasperation, with appeals to relevant authorities to ensure that justice is rightly served.

According to the family’s history, the late Nwafor Okoro married a second wife who would take care of his little children, just after the death of his first wife, and then went on to marry the third one years later.

It is the son of the third wife, Mr. Linus Nwafor, whose late mother had lived together with the second wife, in a thatched house given to them by their late husband, that decided to build a new house for his stepmother, who took care of him alongside other stepchildren when their mothers died.

The nonagenarian second wife, Mrs. Veronica Mgbokwa Nwafor, is left with just her married daughter whom she has been living with for over thirteen years having also lost her only son.

However, weeks after the four-room bungalow was begun, getting to approximately sixty percent completion, the irated sons of the first wife, numbering three, aided by their mother and other assailants, pulled down a large portion of the house, on the grounds, according to kinsmen, that the widow has no right of residence in the said vicinity given she has no son.

The accused, Emmanuel Nwafor, Izuchukwu Nwafor, Chidiebere Nwafor, and their mother, Helen Nwafor, are at large, though one of them is currently cooling off at Zone 13 of the Nigerian Police Headquarters, Ukpo, Dunukofia Local Government Area.

Giving details of the incident, Mr. Linus Nwafor, the son of the third wife erecting the structure for the nonagenarian stepmother, said that his stepbrothers had threatened his life and to pull down the house if he ever attempted to embark on it, but he appealed to them to seek customary approach to the matter, and that if at end it is proven that the woman has no right of residence in her husband’s house, he would leave the house for them.

He appealed to the government to weigh in on the issue, stating that his intention is to give the stepmom a befitting home and bring her back to retire peacefully in her own abode.

The Chairman of the kindred, Mr. Chinedu Onyejeka, in his testimony, said that the family’s issue had been brought up in their meetings, adding that the widow had called him countlessly to say that since his stepson had been the only one looking after her since she took ill more than thirteen years ago, she was giving everything she had to him in the event of her demise.

In an interview, the Commissioner, Lady Mezue, described the incident as barbaric, but pledged that the State government has already taken over the case, and would give thorough justice to it.

She said that Governor Willie Obiano had already given directive that the project be continued with immediate effect, noting that the Ministry is seriously engaging grassroots women monitors scattered across all the communities in Anambra State, to monitor related issues and report back to the Ministry for onward intervention.

The team later visited Zone 13 Police Headquarters, Ukpo, where one of the culprits is held.

The Transition Committee Chairmen of Orumba North, Chief (Mrs.) Ify Obinabo and that of Orumba South, Chief Cyprian Okereke, who were also in the visiting entourage