The long lasting communal crisis between Anaku and Omor, two neighbouring communities in Ayamelum Local Government Area of Anambra State, intensified in the wee hours of Sunday, May 15, when indigenes and residents of Anaku were sacked from their homes following an early morning attack on Anaku by Omor Community, report Jude Atupulazi and Chioma Ndife.

Anaku, like all other communities surrounding it, is a quiet, agrarian community in Ayamelum Local Government Area.

Fides investigation revealed that the attack started around 5am that fateful Sunday and completely took the people of Anaku by surprise, with some of them already in church for Sunday worship, while others were still in bed.

The attackers set upon burning houses and looting property from those houses as the indigenes of Anaku fled. 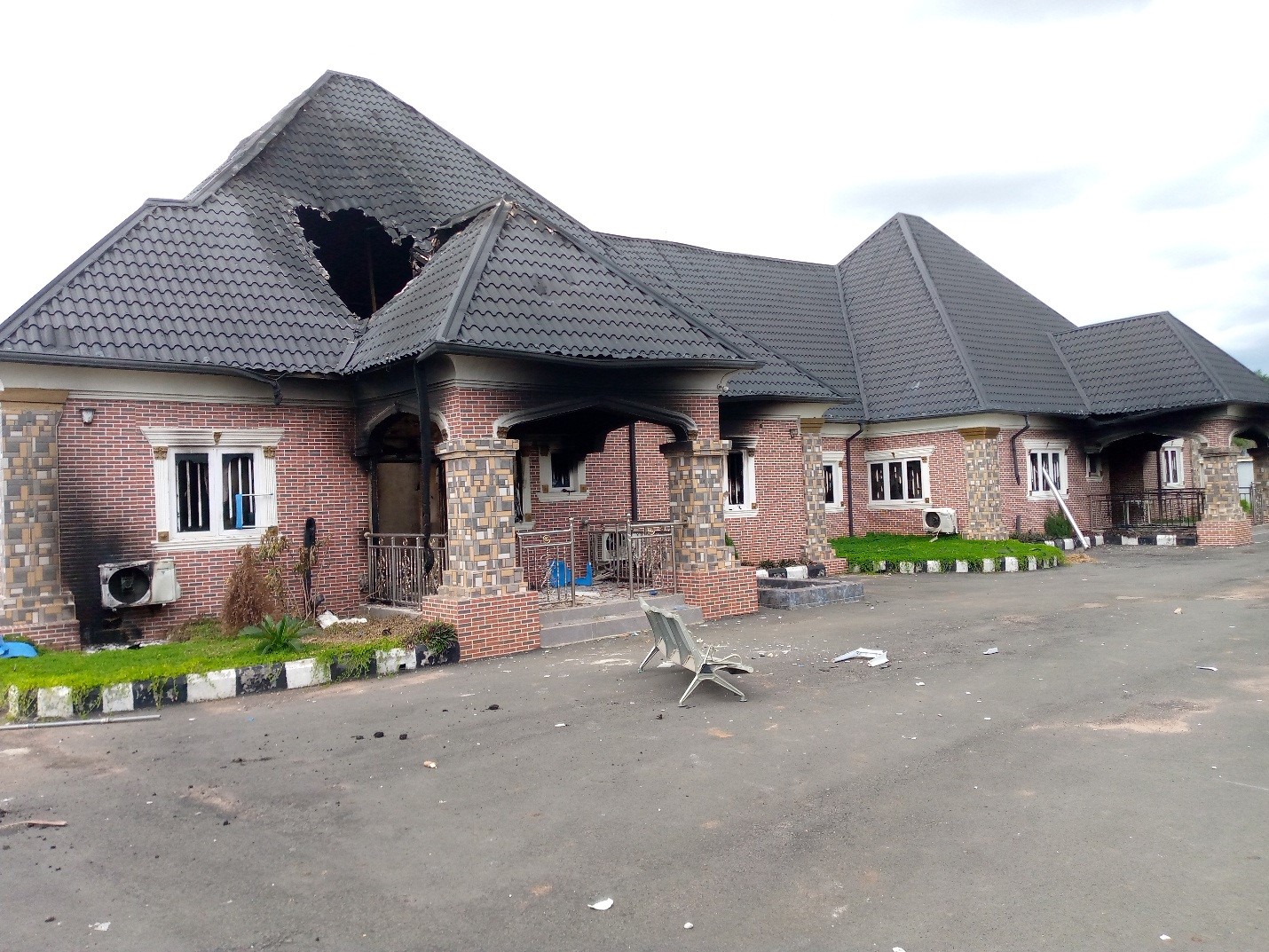 The destroyed home of former commissioner

Not even a police station stationed in the town could deter the attackers as they even shot dead two policemen as confirmed by police sources in the state who put the total number of the dead at three. However, sources from Anaku claimed the number was more, including an indigene of Aguleri, the governor’s home town.

At the end of the attack, many residential houses in the community, including the homes of the late traditional ruler (who is yet to be buried), were burnt.

This also included the house of a former commissioner in the state, Dr. Christian Madubuko, who recently resigned from the Obiano Government as the Commissioner for Tourism and Diaspora.Fides’ inspection of the destroyed houses revealed that they might have been destroyed by dynamites as the roofs were torn open, with window glasses shattered.

The usually busy major road that connects Anaku with neighbouring communities was empty of traffic, a day after the attack. All the shops were closed and at the few places people were seen, they gathered in little clusters and seemed apprehensive.

Policemen at the only police station in the town also looked apprehensive as they sat in front of the station staring back at whoever stared at them.

Sources said that the recent clash erupted as a result of a dispute over some portions of land which the two communities are claiming ownership of. The land under contention had earlier been addressed by stakeholders in the two communities and a concensus which allowed those that farmed on the said land the previous years to harvest their farm produce was reached. The period was also to avail the stakeholders time to investigate into the matter for peace to reign.

However, some persons in Omor Community allegedly cleared the entire piece of land with bulldozers, destroying the farm which people had cultivated the previous years, while erecting beacons and apportioning the land to themselves. The act which angered some persons from the kindred that owned the land, forced them to confront those seen at the land. The said Omor persons who were chased out of the land, galvanized support from their kinsmen and stormed Anaku Community with sophisticated weapons last Sunday.

The Anaku Side of the Story

An Indigene of Anaku Community who pleaded anonymity, explained that the land under contention belonged to Obukwu Kindred in Ikenga Village of Anaku, but due to the brotherhood existing between Obukwu and Amikwe in Omor Community, they allowed the Omor indigenes to be farming on the land with them. The source said that the two communities had been farming on the plots of land together without dispute till persons from Omor Community started claiming full ownership of the Land.

‘Then last two years, the indigenes of Omor Community started chasing farmers from Anaku away from the land, claiming that they wanted to build houses on the said land. Ayamelum people after the fracas that erupted the previous year, agreed that a boundary would be placed on the said piece of land to stop further loss of life and property. But without waiting for the boundary, Omor indigenes went into the land and started dividing it among themselves and when the kindred from Anaku got hint of it, they went and removed all the erected beacons. This now triggered the crisis that led to the killing and burning of houses,’ our source said.

‘About eight persons in Anaku were killed, including two police officers who tried to stop them from breaking into the station. They broke into the police station, carried rifles and ammunition and even beheaded one police officer. I can’t really say how many Omor persons were killed because they came with a van which they used in carrying dead people from their own side.

‘There is need for a lasting peace in the community and those instigating these conflicts need to have their heads re-examined. Ayamelum as  an LGA is totally backward and we are destroying things which we have managed to put together, it doesn’t really speak well of us.

‘Omor Community really needs to watch it. They are always at loggerheads with every community in Ayamelum. The other time it was Umumbo; at some point, it was Igbakwu and others around their neighourhood. And it has left one to wonder what was really going on with the community and it is not out of place to conclude that crises and killings are the second nature of Omor Community,’ he concluded.

Another source, Michael Atumanya, expressed no surprise at the attack by Omor Community, saying it had been their trade mark over the years.

‘They have always employed both violent and nefarious means for forceful annexation of lands belonging to neighbouring towns. Anaku people have always been at the receiving end of this age-long land dispute between the two communities,’ he said.

Going further, he said that in one of their numerous coordinated attacks by Omor in 2008, the people of Omor attacked the late Mr Ayaduno Obodeze and other indigenes of Anaku with machetes and AK-47 at Igbachala farmland which eventually led to his untimely death.

Equally, the same year, he said, the people of Omor killed Mr Ozoemena Edunor and in 2016 the Omor people  attacked several persons from Anaku and killed  Mr Okaka Atumanya on the same piece of land, took his body away and mutilated it.

‘The matter was reported to the government and suspects charged to court but it died at Otuocha High Court without justice. In their impunity, 2015, the people of Omor demolished Obukwu Town Hall and the country homes of Mr Raphael Onochie, Stephen Ndife, Chijioke Okechukwu, and Oranefo Nwakwudo.

‘In 2019 the people of Omor equally burnt down Ayamelum Customary Court at Ikpa Obukwu Anaku.

‘Based on historical antecedents, the people of Omor are known by the public for their track records of violent tendencies, brutality, vain arrogance, greed, disrespect for laws and constituted authorities. There is overwhelming evidence that Omor is determined to suppress and erase every other Ayamelum neighbour and grab their lands through wars of attrition.

The Omor Side of Story

An indigene of Omor Community, Mr. Clement Achebe, agreed that the land under contention was owned collectively by the two kindreds from both Anaku and Omor who had also been farming collectively on said plots of land since time immemorial. He however said that the bond between the forefathers was broken when some part of the land was sold and the subsequent Ekenedilichukwu Farms started activities in the area.

He said that the plots of land were also sold to Sunshine and Mafaco, before coming to drag the remaining plots with Omor Community.

‘Now, some days ago, Anaku people sacked all farmers from the farmland and this angered some youths who wanted to confront the Anaku people, but an elderly man intervened and stopped the planned intervention. They continued and started destroying blocks which some persons had moulded to erect their buildings.

‘They continued and blocked the road, making it very easy for them to attack the former Chief Justice of the State, Justice Paul Obidigwe, who was returning to Omor from Onitsha. The Chief Justice who is about 80 years old, had no knowledge of what was happening and his car glasses were destroyed and two phones seized. A section of Anaku came and settled with the attacked Chief Justice who simply requested for his phones and said he had no issues with them.

‘The same youths later in the evening invaded Omor Community, broke some house windows and later that night set a house ablaze in the community,’ Achebe said.

According to him, the affected persons then prepared for war and went to Anaku to fight against the injustice meted on them.

He however advised that only dialogue could solve the problems between the two communities for peace to reign.

Now, apart from demanding compensation, Anaku Community wants the government of Anambra State to use the topographical information available  to intervene and see that peace is restored and justice done on the matter by ensuring that boundaries are erected between Omor and Anaku, Omor and Umumbo, Omor and Igbakwu, as well as other communities in the area, for peace to reign.