To tackle crime and insecurity in the community, Amesi Town in Aguata LGA, Anambra State, last Saturday, January 23, inaugurated a new and reformed  Vigilante Group which was equipped by the people of the town.

Fides gathered that the inauguration, which was held at Central School, Amesi, marked the conclusion of the one month intensive security training earlier organised for the men of the vigilante. 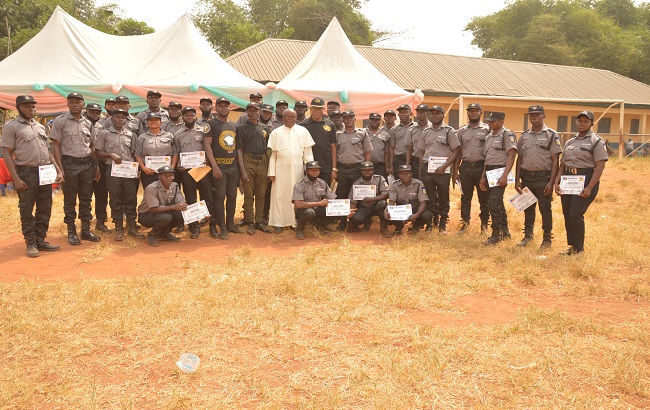 In his address of welcome at the event, the President General (PG), Amesi Improvement Union (AIU), Hon Leonard Muorah, noted that the need for the security outfit, which he described as a reinvigorated vigilante group, was to tackle the disturbing incidents of burglary and vandalisation recorded across the establishments and assets of the community.

Hon Muorah, who traced the history of the project, which, he said, started in April 2020, after the community raised money and gave various COVID-19 palliatives to 800 less privileged members of the town, appreciated Prince Greg Ezechukwu, who, according to him, coordinated the fund raising for both the COVID-19 palliatives and the vigilante project, for his sacrifice and support.

The PG equally appreciated Mr Peter Umeonwuka whose suggestion, he said, gave birth to the project; Mr Valentine Ozigbo; Ichie Sunday Ezeobiora and others, who donated to the project; as well as Mr Robert Umeozulu, who hosted the virtual meetings, for their support. He also commended AIU of USA, Canada, UK, Ireland and the branches in Nigeria for their various donations to the projects.

Pointing out that the community had from its limited resources, provided the required start off working equipment for the vigilante operatives, Muorah, appealed to Gov Willie Obiano to support Amesi Town with additional patrol vehicles, more security equipment, computer sets for the vigilante office, communication gadgets and street lighting of the major roads in the community. 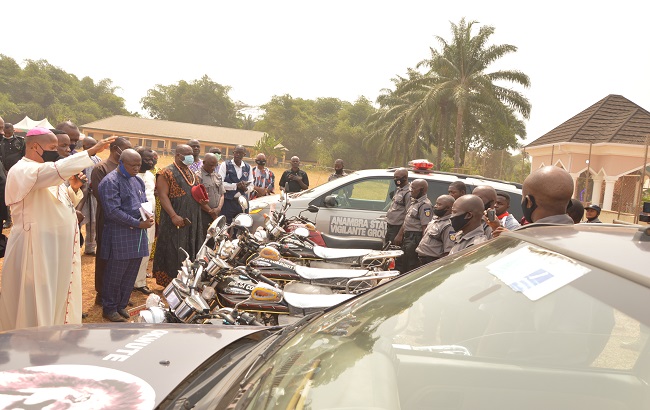 The Bishop of the Catholic Diocese of Ekwulobia (CADEK), Most Rev Peter Ebere Okpaleke (1st from left), blessing the security equipment, security vehicles and the security personnel.

The PG thanked the Anambra State Government, who, he said, through the State Vigilante Supervisory Committee, trained the vigilante operatives.

Chief Ezeonwuka, who represented the governor, extolled Amesi Community setting the pace for improved security with the vigilante group and provision of security equipment. He encouraged other communities to emulate the town so as to put an end to insecurity.

Earlier in his remarks, the chairman of the occasion, Engr Chidi Ezenwanne, lauded Prince Ezechukwu for the financial support and the ingenuity which he gave to the fund raising project. The chairman, called on other people and branches of the community who were yet to donate to the security project to do the needful

Engr Ezenwanne exhorted the vigilante operatives against rascality and urged them to handle the security equipment properly and carry out their duties diligently with discipline and humility. He urged them to pray to God for the wisdom to make proper use of the equipment, which they were trained for.

In his speech, the coordinator of the fund raising project, Prince Greg Ezechukwu, thanked God that the people of the community had, through the “Save-Our-Soul”, fund raising, come to the realization of Amesi of their dream. 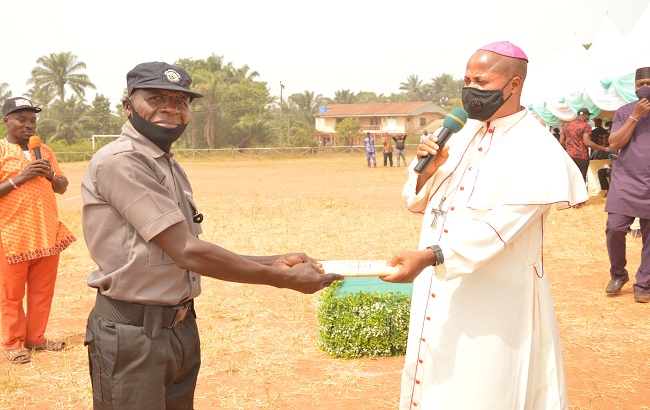 The overall best in the oral and written examination, Mr Vincent Umeokwonna (left), receiving his award from Amesi Community. The presentation was made by the Amesi-born Bishop of CADEK, Most Rev Peter Ebere Okpaleke. Mr Umeokwonna also received a cash gift from Mr Val Ozigbo.

Prince Ezechukwu, who was represented by his brother, Engr Oscar Ezechukwu, thanked the leadership of the town for the opportunity to serve and the people of Amesi, for their support in various ways.

For his part, a frontline Anambra State governorship aspirant on the platform of the People’s Democratic Party (PDP), Mr Valentine Ozigbo, identified intelligence as a very important aspect of security.

Ozigbo, who hails from Amesi, called on every member of the community to work with the vigilante personnel for an improved security for all. He called on Gov Obiano to encourage the town with more vehicles and security equipment in line with the rule of performance-based governance.

In their various interviews with Fides, two of the vigilante operatives, Mr Chidi Onwuahaobi and Chisom Lilian Ezeofoma, both Amesi indigenes, said they felt happy being found worthy to serve the community in such capacity. 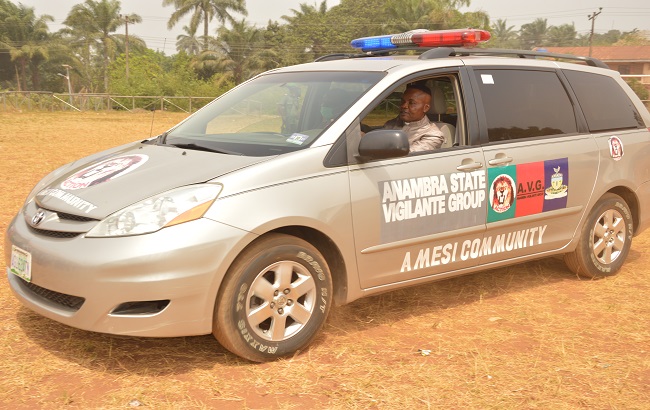 They promised to give their best to the job.