The event which was held at the deanery headquarters, St Matthew’s Catholic Church, Amawbia, doubled with the N25m launch for the completion of the deanery CWO’s Stella Maris Skill Acquisition Centre.

It featured inter parish march past and royal family competitions, as well as the installation of the Head of Service of Anambra State, Barr Harry Uduh, as the grand patron of the deanery CWO. This was even as other individuals who were selected from the twelve parishes that make up the deanery were honoured as patrons, patronesses and diamond ladies of the organisation.

The CWO of the newest parish of the deanery, St Patrick’s Parish, Mbaukwu, won the 1st position in the march, past while CWO, St Theresa’s Parish, Nibo and CWO, St Joseph’s Parish, Nibo, won the 2nd and 3rd positions, respectively.

In her address of welcome, the Organiser, CWO, Amawbia Deanery, Lady Tina Obiechina, LSM, solicited donations from all in support of the completion of the ongoing CWO Stella Maris Skill Acquisition Centre pegged at N250m.

The organiser who recalled that the project was started by her predecessor, Queen Lady Ngozi Ekwunife, explained that the skill acquisition centre was initiated to equip the women, especially the young ones, with skills that would help them to earn a living.

Lady Obiechi commended the Convention Committee led by the Chairman, Mrs Regina Igwebuike, for the sacrifice and efforts, which, she said, contributed to the success of the event.

Earlier during a concelebrated Holy Mass that was led by the Chaplain, CWO, Amawbia Deanery, Rev Fr Bonaventure Nwankiti, the Dean, Amawbia Deanery, Very Rev Fr Michael Onwukike, in his homily, tasked the mothers and all Christians on total trust on God, even in the midst of difficulties. 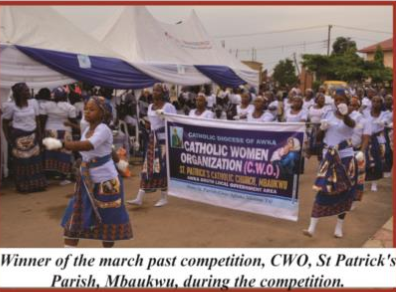 Rev Fr Onwukike, who is also the parish priest of St Matthew’s Parish, Amawbia, commended the mothers for what he described as the committed good work they did in their families and the Church, urging them not to relent. The priest assured them that God, who, he said, never forgot his people, would surely bless, uplift and sustain them.

In his remarks, the Chairman of the occasion and MD, DumoField Farms Ltd, Dr Ikem Odumodu, urged the mothers, whom he described as pacesetters in proper human formation, to put in more effort in their responsibility so as to ensure a safe Anambra State and Nigeria for all.