There are two roads leading into and out of Anambra State from Enugu. There are the old Enugu-Onitsha road and the Enugu Onitsha Expressway, both in Amansea, Awka North Local Government Area, a border town with neighbouring Enugu State.

Both roads are federal roads and as such, the responsibility of the Federal Government to construct. While the contract for the construction of the Enugu-Onitsha Expressway has continued to linger since the administration of former President Olusegun Obasanjo, the government of the All Progressives Congress (APC) under Muhammadu Buhari, has, however, started making political gains out of the road concerning the contract.

The APC, in listing some of its ongoing works in the state, never fails to mention the Second Niger Bridge where work is at an advanced state, and also the Mausoleum of the Great Zik of Africa, Dr Nnamdi Azikiwe. The party also frequently cites the Enugu-Onitsha Expressway as one of its ongoing projects.

The party, in trying to justify the benevolence of the President Muhamadu Buhari Administration to the South East, always recalls how several contracts have been awarded for the construction of the road, and all abandoned, until the coming of President Buhari in 2015. 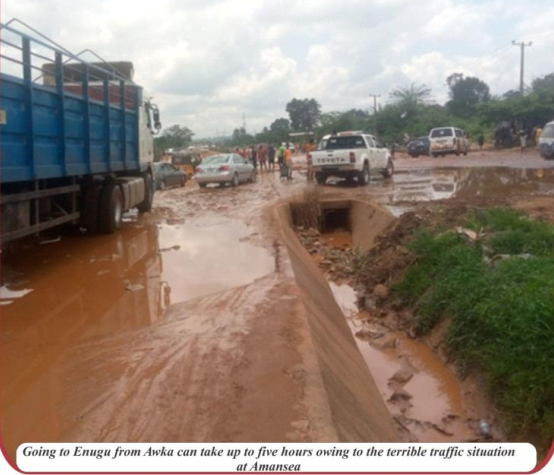 As true as it is that the administration has been working on the road, investigations have however shown that even though work is at an advanced stage on the Enugu axis of the road, with a huge chunk of construction work also being completed on the Anambra axis of the road; especially between Amawbia and Awkuzu on one lane along the Onitsha road, a particular portion of the road in Amansea has blighted all the job done on other parts.

Fides investigation shows that even though the portion at Amansea has remained abandoned for years, leading to the use of the old road to get to Enugu and into Anambra by those coming from Enugu, the old road has itself collapsed, leading motorists to resort to the previously abandoned Enugu-Onitsha Expressway.

A journey from Awka to Enugu, which ordinarily took about an hour before, now takes between four and five hours, with a large chunk of the time spent just to pass through Awka to Amansea, which is still within Anambra, before the journey begins.

Checks showed that the old road, which is mostly preferred by commuters, has been abandoned because of numerous checkpoints on the road, beginning from a military checkpoint immediately outside Awka.

A commercial driver who works with Eastern Mass Transit, Mr. Francis Anaga, said, ‘I no longer use the old road to go to Enugu from Awka. As a driver who drives a company bus, I am only given money for fuel and my own payment before I proceed to take passengers to Enugu, but each time you use the old road, the number of checkpoints on the way makes one to spend almost everything one has.

‘It is either I drive through Ifite Awka and go to Ebenebe in Awka North before joining the express and going to Enugu, or I will use the expressway and spend time at the bad portion of Amansea.

The very terrible thing is that on any of the three routes that you choose to use, you must pay a heavy price for it. If you go through the old road, you must be ready to stay for hours in traffic because military people must search every bus that is passing, and that takes several hours. Even if you later pass that spot, there are a lot of other checkpoints on that road. 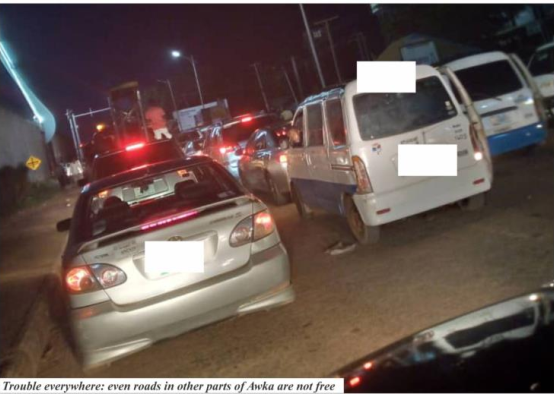 ‘If you use the express, you must be sure to spend hours at the bad portion of Amansea because there are a lot of lorries on the road, and some of them break down on the middle of the road, making it difficult for us to pass by.

Then, if you settle to use Ifite – Ebenebe road, then you must be ready to settle village youths who stay there to take money from people. You also know it’s a very lonely road, so, if your vehicle breaks down there, you will not be able to find help. There is no easy way to go to Enugu from Awka now,’ the Ebonyi State born driver bemoaned.

Checks at the bad portion at Amansea have shown that the area has become a spot for quick business, both for Amansea youths, petty traders and also for town service transporters.

For Amansea youths, Fides witnessed that they have constituted themselves into groups that help to pull out broken down vehicles from the bad spot. The youths who operate in groups of four or five and sometimes above, simply lay siege in stalls, waiting for a vehicle that will be entrapped in the muddy road.

There is a price tag for every kind of vehicle that needs their energy to help pull them out. To push out a car costs between N500 and N1, 000, depending on how badly stuck the car is in the mud.

The youths also collect same price for commercial buses, but for private or company buses, their services can go up to N2,000, and most times it depends on how badly stuck the vehicle is in the mud.

Around the bad spot, hawkers and other traders have found a good place for business. While young boys and girls hawk snacks, sachet, bottled water and other soft drinks in the spot, some women have already built make-shift shops where they sell wares, ranging from hot drinks, roast maize and all other items.

The fact that each commercial vehicle using the road usually makes its passengers to disembark to free the buses of load, also makes business better for the traders because most passengers, in doing so, always find one item or the other to buy.

A woman at the spot who vends food and drinks, said, ‘Sometimes we close very late because it is even at night that we sell more. Most of these tanker drivers end up sleeping here, and they need people to sell things to them.’

One of the traders whose identity was not captured by Fides said she sometimes closed in the evening and her son took over.

Also, commercial motorcyclists, tricyclists and shuttle bus operators have started using the spot as a loading bay. Fides observed that commuters who are not so sure of the strength of their vehicles always discharge their passengers at the bad spot, paying them to join another vehicle to town, therefore creating business for commercial town service operators.

Meanwhile, there are concerns about what could be the fate of the road, or whether it has been abandoned by the Federal Government. Last week, the candidate of the All Progressives Congress (APC) for the November election in Anambra State, Senator Andy Uba, while addressing his supporters at a reception organized to welcome him from Abuja, said APC was set to liberate Anambra. He said once the state was connected to the centre through an APC victory, the state would instantly be liberated.

‘That is the benefit of being connected to the centre. The minister is on his way now to Anambra . This failed portion that is causing the traffic on this road will be fixed. Anambra will be liberated. In fact, Anambra is already liberated. The day the president gave me the flag of our party is the day Anambra was liberated,’ Uba crooned.

Despite the assurances that the minister was on his way on that Friday to order the construction company handling the project to get back to work, four days after, Fides visit to the spot showed that no work was going on, nor was there any construction equipment so far deployed to the area.

The Controller, Federal Ministry of Works in Anambra State, Engr. Adeyemo Ajani, in a telephone interview with Fides said that part of the road was not the responsibility of the Federal Government.

He said the Federal Government would have been willing to take on that part of the road, same way it was constructing the full stretch of road from Enugu to Onitsha, but that the state government had promised to intervene.

‘As I speak to you, intervention on the road should be ongoing now. The state government has always been the one that takes care of the part of the expressway that passes through the Awka metropolis, and that is from Amansea to Amawbia, which is Awka South Local Government Area,’ Ajani explained.

When Fides reminded him that it paid a visit to the portion just a day before, and that no work was ongoing, nor were any construction equipment found in the area, with travelers still stuck in the area on a daily basis, Ajani insisted he was sure the state government would do something.

‘What you people don’t know is that the part of the express that passes through the capital city is the duty of the state government (to maintain), and they can construct it and the federal government would reimburse them.

It has always been so from the days of Governor Peter Obi. Go and check from Awka to Onitsha and even from Enugu to Awka, and see the job we are doing there. That portion is for the state government to work on and now seek reimbursement,’ he stated.

Attempts by Fides to contact the Commissioner for Works in Anambra State, Engr Marcel Ifejiofor, to seek clarification on why the state government was yet to commence work on that portion were unsuccessful. Phone calls made to his personal telephone line were not answered as at the time of filing this report.

Meanwhile, road users, including travelers and commuters, have continued to lament over the bad condition of the road. A civil servant with the Anambra State Government, Mrs Angela Udeh, who spoke to Fides, said, ‘Our suffering on this road is just getting too much.

Enugu to Awka, which we used to pay N200 just less than three years ago, is now N1, 000 for bus. If you want to use Sienna, you can pay as much as N2, 000. Some days, we come out and we don’t even find bus to go home. I am a civil servant, how much is my salary that I should spend up to N2, 000 every day for transport? I have to do it for five days of the week for one month. I have children to feed and other needs to take care of. Government should please help us.’

For now, the people of Anambra continue to groan over the nightmarish condition of the Amansea road, waiting for a miracle.