Altruism Even in the Grave: Mrs. Gloria Ukamaka Okafor

By Chioma Ndife and Daruwana Daku

For Dr Laz Okafor, husband of the late Mrs. Gloria Okafor, the inherent attribute of his wife with regards to kindness and acts of benevolence must continue to soar high, even in her grave.

The unarguable show of love to humanity, particularly the elderly, vulnerable groups and children of the less privileged, that the wife was a crusader of until her death, was a pointer to the free rural medical outreach that was held in her country home at Eziowelle Community Civic Centre in Idemili North Local Government Area of Anambra State on Thursday, November 11, 2021, in her honour. 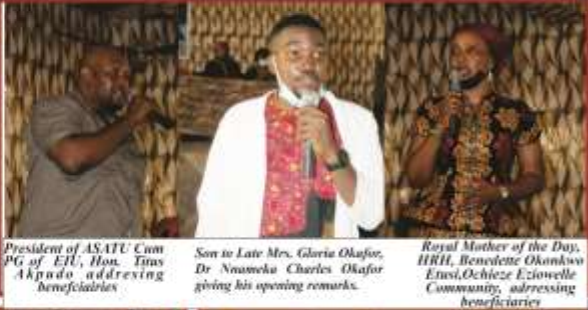 The event which was tagged, “Giving Back to Society: Eziowelle Rural Medical Outreach in Honour of the late Mrs. Gloria Okafor”, was widely received by the indigenes and non-indigenes living in the five villages in the community.

The medical outreach was witnessed by over 150 beneficiaries who were attended to by Twenty young doctors in different areas of medicine, among which were friends and old school mates of Dr. Nnaemeka Charles Okafor, son of the deceased.

Beneficiaries from neighbouring communities were also attended to.

In his lecture, Dr Valentine Aroh, an indigene of the community from Umunnama Village, educated participants on prostate challenges in men and arthritis; while Doctors Onyinye Obiukwu and Igwilo Kenechukwu, spoke on breast cancer among women and the importance of primary health care facilities in any community, respectively.

Addressing participants and guests at the programme, the Chief Facilitator and husband of late Mrs. Gloria, Dr. Laz Okafor, spoke extensively on the importance of the event, the need to give back to society and the life and times of his late wife whom he described as one with a philanthropic spirit. Dr. Okafor who emphasized the significance of health, also stressed that the health of his community was of utmost concern to his wife before her death; a development that brought about the event.

Dignitaries eulogized the family for their gesture. Among them were the President, Anambra State Association of Town Unions, who doubled as the President General, Eziowelle Improvement Union Nigeria, Hon. Chief Barrister Titus Akpudo; who spoke in gratitude to the family of Okafor in deeming it fit to immortalize their late wife and mother in the major area of her interest – giving back to society.

Barrister Akpudo also stressed that the kind gesture of the family was an indication that the Community had people of substance that were ready to help them in times of their need.

Fides gathered that the free medical outreach was targeted at meeting up with the wish of the late Mrs. Gloria Okafor who had wanted to do same anytime his son graduated from medical school.

It will be recall that the late Mrs. Gloria Okafor died in February this year, leaving her husband and three sons: Dr. Charles, Rx Favour and Uchechukwu Okafor.