All Saints Nursery/Primary School, Awgbu of Adazi Region and Handmaid Infant Jesus Nursery/ Primary School, Awka of Awka Region, have each defeated eight other schools to emerge the winners of the 2022 Annual Catholic Diocese of Awka Primary Schools Quiz Competition for the senior and the junior categories respectively. 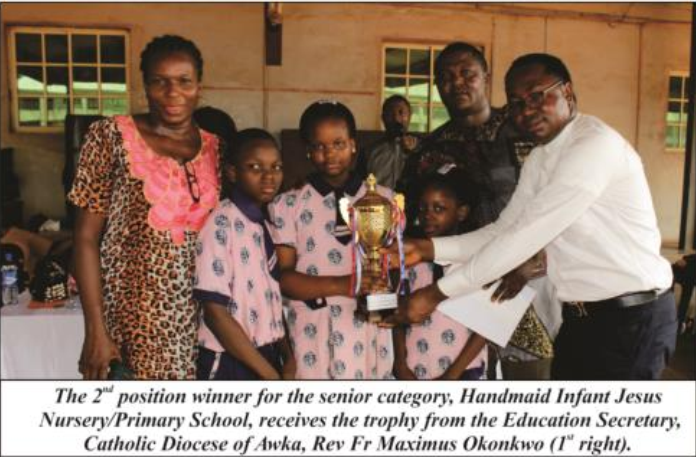 In the grand finale of the 2022 competition held at St Patrick’s Cathedral Podium, Awka, on Thursday, February 24, All Saints Nursery/Primary School, Awgbu, Orumba North LGA, took the 1st position of the senior category with 95 marks; while Handmaid Infant Jesus Nursery/Primary School, Awka, emerged the winner of the junior category with 90 marks.

Fides reports that out of the about 152 primary schools in the Catholic Diocese of Awka, nine schools that won the 1st, 2nd and 3rd positions each at the regional level made it to the diocesan finals.

Each of the nine schools was represented by three pupils in the both senior and junior categories. In the keenly contested competition, each of the schools answered a total of twenty one questions in both categories which involved seven subjects.

Fides equally gathered that the competition was co-sponsored by GoldField Publishers, Ogidi, Anambra State. The publishing Company donated N100, 000 which was used as cash prizes for the first, second and third position winners. 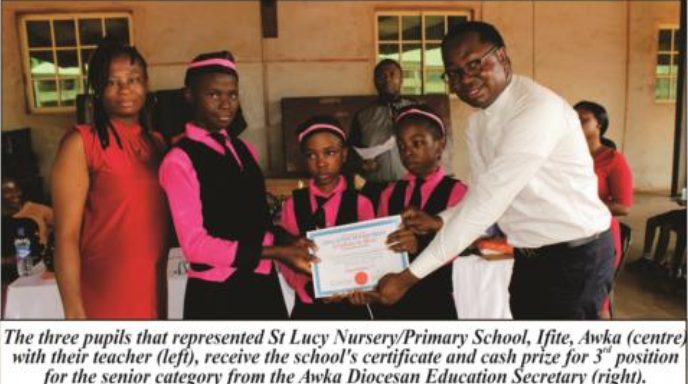 Speaking on the occasion, the Coordinator of Awka Diocesan Quiz Competition, Rev Fr Felix Nwosu, commended the 18 schools that made it to the finals in both categories for what he described as their excellent performances in the competition.

Fr Nwosu, who is also the Education Secretary of Adazi Region, congratulated the winners on their victory and urged them not to rest on their oars, but to put in more effort to do better next year and bring the trophy home to Awka Diocese from the Onitsha Ecclesiastical Province Quiz Competition, which, he said, they would participate in in 2023.

Presenting the trophies and cash prizes to the best three schools in both categories, the Education Secretary, Catholic Diocese of Awka, Rev Fr Maximus Okonkwo, congratulated the pupils for what he described as the noble victory they earned for themselves, their schools, their various deaneries and the regions. He encouraged them and the schools to remain worthy ambassadors of the Church.