…As Igwe Okoli Sues for Peace across Quarters

The ceremony which was held at his palace, Friday, August 26, was graced by the chairman of Orumba South Traditional Rulers Council, and traditional ruler of Nawfija, Igwe Clifford Okeke; his Owerre-Ezukala, and Eziagu counterparts, Igwe Thomas Ogbonnaya and Igwe Bernard Emejuo, among other traditional rulers from the council area, as well as priests from the Catholic and Anglican Communion.

Performing the event, Igwe said the festival was a special moment for members of the community to thank God for preserving their lives during the planting season and for rewarding them with bountiful harvest, saying that initiatives to encourage farming would be put in place by the next New Yam Festival.

He prayed for peace in Akpu Community, the state and nation at large, and expressed the community’s delight over Governor Chukwuma Soludo’s leadership in the state, pledging the unalloyed support of the people of the area to his administration.

He prayed God to solidify the peace which he said the community had been enjoying at the moment and explained that he became the Igwe in order to settle all outstanding conflicts in the community, noting that peace brought development. 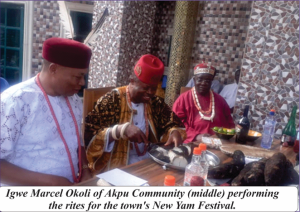 The traditional ruler maintained that a Charity Trust Fund would be created in the community for the poor and downtrodden to ensure the actualization of all persons’ potentials.

He expressed optimism that with the creation of Peter Cardinal Okpaleke, emergence of Peter Obi as President and Hon. Ben Nwankwo as Senator for Orumba South Constituency, normalcy and unprecedented development would be birthed in the area.

Igwe Ezechukwu called on youths to develop skills and passion for agriculture in order to boost food security and assist in the actualization an ideal nation.

Speaking to Fides, the chairman of Orumba South Traditional Rulers Council, and traditional ruler of Nawfija, Igwe Clifford Okeke, described Orumba South as unique and that it explained the oneness of purpose in their affairs.

He expressed optimism that Soludo’s Administration would favour the people of the area in terms of infrastructural development.

Welcoming the traditional rulers to the celebration, Hon. Ben Nwankwo described Akpu Community as the most generous and stated that the festival was a unifying factor in the community. He called for peace and sustainable development in the area.

The cultural festival which was attended by members of Igwe-in-Council, Umuada group and youths, featured masquerade displays, as well as distribution of tubers of yam.

The oldest ancestral cultural troupe spiced the celebration with their performance.