The Maiden edition of “My Anambra football Super 8” tournament came to an end last Saturday, with GP World Football Academy of Nnewi emerging champions after a hard fought final with Konti FC.

The much anticipated final match ended in a 1-1 draw after regulation time, before being settled in a penalty shootout. 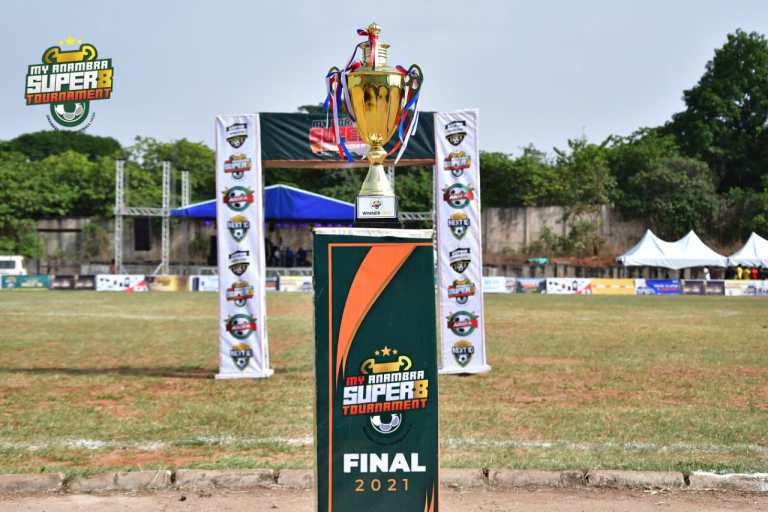 Konti FC took the lead in the 5th minute and were on the verge of running away with the win, before GP World’s Adina Odinaka restored parity from the spot in the 88th minute, sending the teams into a penalty shoot-out, where GP World FA beat Konti FC 4:3 to emerge champions of the very first edition of the tournament.

The Champions, GP World FC took home the grand prize of N500,000 with an ‘NLO slot’ to play in the National League One.

Dr Emeka Okeke, the brain behind the tournament “My Anambra Football” who spoke to Newsmen shortly after the games noted that this was the first time the players and Clubs gained such promotion and publicity in Anambra state. He called on Anambrarians to join hands in reawakening, re-inventing and supporting the new brand.

Also speaking, Mr Patrick Okeke, the president of Aspire FC, Adazi-Ani lauded the initiative of Dr Okeke, adding that it was aimed at raising  the social consciousness among Anambra football enthusiasts and stakeholders.

He also urged private sectors individuals to join hands to promote the brand.

Fides recalls that the Championship group matches for “My Anambra football Super 8” were played at the Chuba Ikpeazu Stadium, Onitsha, while the semifinal and final games took place at the Neros Stadium Nanka.

The tournament was organised by “My Anambra Football” Organisation as part of its “Next 10” year plan to reawaken football in Anambra State.

My Anambra Football is a public and private sector platform geared towards developing and promoting Anambra State Football through investments in physical infrastructure, technical training, promotion and access to global markets.