On Saturday, August 27, all roads and air routes led to Rome where an illustrious son of Igbo Land, then Most Rev Peter Ebere Okpaleke, Arch Bishop of the Catholic Diocese of Ekwulobia, was created a Cardinal by Pope Francis. Ordinarily, that event could have passed for yet another epochal one in the life of the Church but for the peculiar circumstances that threw him up as the latest Cardinal of the Catholic Church in Nigeria.

It wasn’t very long that the people of the Catholic Diocese of Ahiara in Mbaise, Imo State, did the unthinkable in the Catholic Church by disobeying the Church led by the Pope. They refused to accept then Bishop Okpaleke as their bishop, despite all entreaties and diplomatic approaches.

In the end, the Church allowed Okpaleke to administer the diocese from Anambra but shortly after, he was made the maiden bishop of the newly created Ekwulobia Catholic Diocese. What followed was a quick succession of events that saw him being created a Cardinal in Rome. 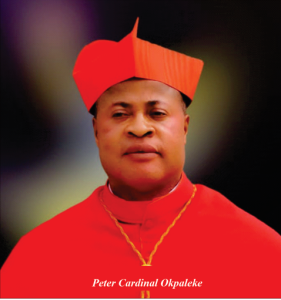 Thus, the shame some elements in Ahiara attempted to bring on the Church turned to glory, not just to Okpaleke, but to all those who still believe in the supremacy of the Church.

Indeed, the Ahiara story threatened to cast a huge slur on the image of the Universal Church apart from being a huge embarrassment. It showed a people bereft of faith and loyalty and a people who placed personal and selfish interest over and above the faith.

That those people refused to listen to wise counsel and entreaties spoke much about their stubbornness. It was a disposition and act very alien to the Catholic Church. It showed that all the years of evangelism in that geographical space were wasted. Their behaviour and recalcitrance smacked of the Dark Ages.

But as it happens often, light will someday surface after darkness, no matter how long. While one condemns the actions of the lay faithful in Ahiara, what can be said about their priests and religious? These people can be said to have led their sheep astray and that, indeed, was the unkindest cut of all.

However, since the event of that beautiful Saturday in Rome, many have expressed their joy through write ups and pointing out the lessons inherent in that development. Here, I’ve decided to share with you one of such write ups written by Fr George Adimike below.

In the just concluded consistory in the Vatican, Pope Francis created 20 new cardinals, including His Eminence, Peter Ebere Okpaleke. By that very act, Cardinal Okpaleke became the 5th cardinal from Nigeria since the arrival of the Christian faith. The four earlier ones are Their Eminences, Dominic Cardinal Ekandem; Francis Cardinal Arinze; Anthony Cardinal Okogie and John Cardinal Onaiyekan.

His creation succeeded Cardinal Onaiyekan’s in 2012, with the news of his appointment coming with great amazement and signalled the providence and sovereignty of God’s actions. While each cardinal is distinguished by his valuable work and witness to the gospel, each appointment has a story.

This grace history, which may be connected with the Cardinal’s See, person or circumstance, demonstrates the will of God. The faithful of the local churches in Nigeria unanimously received Cardinal Okpaleke’s preferment as a great act of divine providence.

Indeed, God is providence who never fails to establish His will in marvellous and mysterious ways. Marvellous because it comes out amazing, and mysterious because it is often beyond or removed from our thinking or control. No wonder His universal government is wrought by providence. The appointment of Bishop Peter Okpaleke to the cardinalate position is one more clearly a demonstration of God’s providence whose ways are not man’s ways (cf. Isaiah 55:8-9).

Experiences have shown that the devil continues to influence humans, who in their thought and will, often erroneously judge and act contrary to the will of God. Notwithstanding human malevolence and malfeasance, God not only scatters negative plans but also transforms rejected stones into the cornerstone.

While some people in the Local Church to which Cardinal Okpaleke had been initially appointed had the right to desire a bishop with their taste buds, they allowed the holy desire for a local shepherd to degenerate into a mindless demonstration of ill will and sin against charity and peace.

From desiring a shepherd cooked in the same pot as the Local Church, they allowed the self-regarding worthy expression of the growth and maturity of faith in the place to degenerate into a self-referential insistence on their will in autonomy that negates the catholicity of the Church. Finally, after years of prayer, patience and discernment, the Mother Church found a solution to the Bishop Okpaleke question by creating the Ekwulobia Diocese and transferring him to the new See.

In patience, Cardinal Okpaleke was tested, and in humiliation, his patience matured. Through long-suffering, his humility begot magnanimity which was all converted to paternal solicitude expressed and lived in pastoral charity, priestly and

prayerful sweetness, readiness to help, and pastoral availability for the needy and pastorally thirsty families and communities.

He was readily available to bury the dead and console bereaved families at his personal inconvenience. This seraphic equanimity that is born in hope, conceived by faith and nurtured with love pervaded him these trying years and concealed his deep pain.

The events of the later days have quite significantly presented the experiences of those years as a threshold of sowing for an eternal harvest. Cardinal Okpaleke dwelt in a liminal space in an ecosystem of faith where human virtues and Christian values were seasoned for pastoral harvest and spiritual flourishing.

In this liminal space, he engaged an integration of the divine and human elements, perhaps to the degree not previously considered urgent. As a result, these virtues produced a sweetness that strives for excellence.

Through this experience and more, the paschal page of his life contains a deep spiritual foundation, profound faith, lack of bitterness, patience and humility, pastoral solicitude, love of God and the people of God, availability to help, diligence to duty, wisdom and knowledge, lively hope and registration to the will of God.

As a people of faith, the cardinalate hat given to Peter Ebere Cardinal Okpaleke is not just a reward or consolation as it is the establishment of the will of

God and a lesson to us all. Let no man stand in the way of God; let no man fight the will of God.

Accept with humility and gratitude, whether difficult or easy, understood or not.

In His will is our peace. And we congratulate His Eminence, Peter Ebere Cardinal Okpaleke, appointed, rejected and then promoted. Once God wills it, the chant ‘we do not want Okpalaeke’ will blossom to ‘hosanna to Peter, the son of Okpaleke’. With Pope Francis, we admire and commend ‘the holy patience of Peter, son of Okpaleke and the ordinary of the Church in Ekwulobia’. The last sentence is that Peter Cardinal Okpaleke is one of the best expressions of the power of grace.