The sleepy town of Aguluzigbo, in Anaocha Local Government Area of Anambra State recently at Aguluzigbo Town hall elected a new traditional ruler in the person of Chief Rufus Ugochinyelu Iloduba despite calls from his opponents to have the election postponed,citing irregularities..

The election which started with an accreditation of registered voters at 9AM witnessed heavy presence of security agents as well as large turn out of indigenes from the six villages that make up the town, independent and government observers were equally present,

The aggrieved members of the community had earlier accused the town Union leadership of manipulating the process hence their resolve to call for the cancelation of the election. 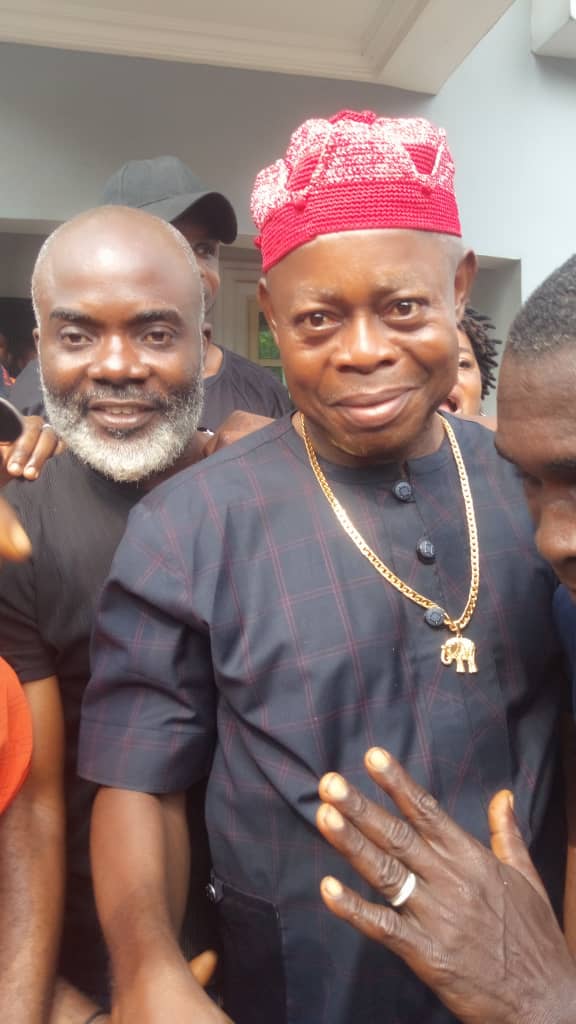 The controversially elected Igwe of Aguluzigbo, Chief Ugochinyere Iloduba in joyous mood after he was announced the winner of the election.

It would be recalled that some youths of the town had earlier staged a protest in Anambra State Government House, urging the governor of the State, Chief Willie Obiano to intervene on the matter.

This plea from the youths came after some folks under the aegis ‘Aguluzigbo Patriots’ in a letter dated January 9th, 2021 noted what they described as illegality of the election and prayed Governor Obiano, among other things, to suspend the election.

However, the town Union leadership led by Mike Madueke went on with the election as mandated by the Anambra state government in a letter dated January 11th, 2021 which was signed by Mr. Mgbedike Ikechukwu on behalf of Hon. Greg Obi, the Commissioner of Local Government, Chieftaincy and Community Matters.

Fides gathered that since the demise of Igwe A. N. Ezeanekwe in 2008 that the road to the Igweship election had been pilled with hurdles. The last attempt was slated on December, 28th 2020 when allegations of foul play led to its indefinite postponement.

Organized in Aguluzigbo Town Hall, which was highly fortified with over 50 security operatives drawn from Special Anti Kidnapping Squad, Nigerian Police, and Civil Defence Corps, the election scene was like a militarized zone as an armored tank, 8 Security Hiluxs, and 6 other patrol cars were lined at the town’s hall.

The six villages of the town were given a canopy where intending voters go to clear themselves with the electoral officers before climbing upstairs to cast their votes. Receipts of ADU levies and dues, which were evidence of non-indebtedness served as the voters’ card in the election.

Earlier on, supporters of Engr. Chuka Asouzu accused the PG and executive members of working for the eventual winner of the election. They also said that their names were expunged from the electoral register despite satisfying the constitutional requirements and were chased away from the election ground when protested.

Asked for clarification on the issues raised by the Engr. Asouzu’s supporters, the PG, Hon. Madueke, noted that the electoral committee was only following the constitution of the town.

He furthered in revealing that voters’ register were compiled by the village chairmen and not in the purview of his duty to explain the reason behind their ordeal.

Speaking on the reviewed constitution, the PG said: “I lacked the power to amend the constitution on my own. The constitution was amended by the committee nominated by six villages of Aguluzigbo.”

But Hon. Joseph Dimobi, the former leader in the Anambra State House of Assembly, in his submission stated that the electoral process was characterized by violence and was flawed from start.

‘Why should we have the invasion of the town by more than 200 policemen?
Is it the way Igweship election is done in other towns? Is our town different from others? Why are they unleashing terror on us using the instrumentality of government?’, he queried.

The former lawmaker pleaded with the state government to cancel the election and reschedule it to 31st December 2021 to enable the town’s general assembly to participate in the election of their igwe as the constitution stated.

Fides confirmed that the electiion followed a secret ballot system and was peaceful, orderly, and free – saved for the occasional noise of some folks who complained about their disenfranchisements.

There were jubilations and shouts of “igweeee” as supporters of Chief Ilodiba celebrate their candidate’s victory.

Fielding questions from newsmen after the declaration of the results, Senator Victor Umeh stated that the road to election had been difficult but was happy that it was democratically organized.

‘The election was peaceful, there was no interference. You witnessed it. people voted for the person they want to be their igwe. I’m happy you covered it fully. The world will now know that Aguluzigbo is truly a united peaceful community. Very few people have been the aggressors but we came together and resisted all things that they have been doing to bring this community down,’ Senator Umeh noted.

“With the successful completion of this Igweship election, I can assure that Aguluzigbo will be one of the most peaceful community in Anambra State. There is no way the minority can overtake the majority with propaganda!,’ he concluded.

On the other side of the coin, Engr. Chuka Asouzu, the defeated candidate, described the election as a “complete charade!”

‘We saw manipulation coming! We are not blind! Even the chairman of the election committee resigned and the secretary resigned yesterday. So you can imagine the type of election so conducted!”

Asked whether he will contest the outcome of the election, the candidate noted that his next line of action was still under consideration.

However the divide the pendulum swings depends on who receives the blessings of the state government. For according to the extant laws of Anambra State , an individual is only recognized as Igwe when he is issued with the certificate of recognition by the State government.