…as Fr. Ekwenibe Charges Fathers to be Vanguard of True Family

Catholic men have been charged to be in the vanguard of true family at their convention held in Agulu, September 25. The convention, according to Rev Fr Dr Hilary Ugochukwu Ekwenibe, chaplain of Agulu Deanery, was organized to bring together the pillars of the family, both young and old, to share common love and expressions, especially about family issues.

It was indeed a day to remember for the Catholic Men’s Organization, Agulu Deanery, as they held their 1st ever Convention and Deanery Day at Madonna Assumpta Catholic Church Agulu, Anaocha LGA of Anambra State.

Fr. Ekwenibe noted that the Deanery started originally from Adazi Deanery in Adazi Region.  Agulu Deanery was carved out in 2011 with the pioneer chairman as Mr. Martin Adaedozie, from St. Peter’s Parish, Nri, who piloted the Deanery from 2011 to 2017. 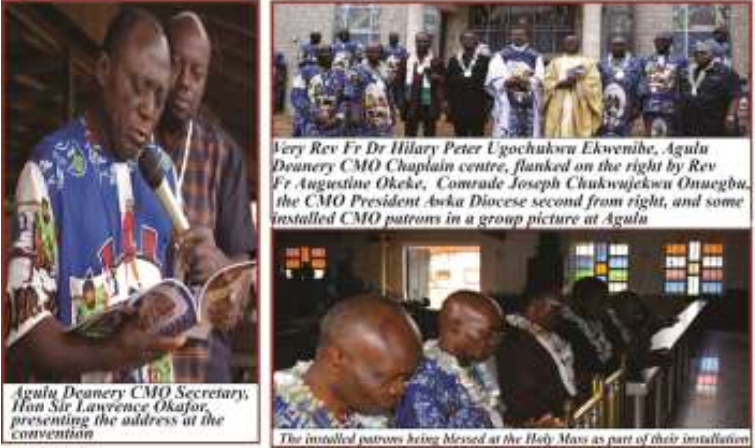 In his address, Hon (Sir) Lawrence Okafor, the Deanery secretary, said that among their target in the event was to enable Agulu Deanery CMO to seek funds to solve some pressing needs.

They therefore appealed for about thirty million Naira or more, which, they said, would enable them to erect a befitting bookshop and office block at St. Patrick’s Agulu. They said the money would also assist in the purchase of CMO a bus for attending CMO functions.

Equally the deanery CMO said they intended buying shuttle buses and tricycles for commercial purposes to reduce CMO levies, especially in the diocese.

Hon. Okafor, speaking to Fides after the event, noted said that the convention faced huge challenges but thanked God that it had come and gone with huge success.

Earlier in his homily during the Mass, the Chaplain and host of the convention, Very Rev. Fr. Ekwenibe, and the Parish Priest St. Joseph’s Catholic Church Agulu, described the event as one that rallied everyone together as people of God. He reminded them that taking care of their children was among their responsibilities and not just their wives.

He gave an instance of men who left early to work every day and came back late when the children had slept. Again, the cleric noted, on Sundays some men would be going from one place to another without having time for their family, making the children to grow with knowing little or nothing about their father.

He however urged them to be good ambassadors of God’s love in their everyday life.

Fr. Hillary then thanked God who made it possible for them to be alive to celebrate the convention, as well as the CMO members, noting that he was full of joy as the Catholic Men’s Organization of Agulu Deanary turned up despite some logistics issues and lukewarm attitude from some members.

He prayed that God would surely keep them on the right path and also direct them on the best way to rule their families.

Fides gathered that the 10 parishes of the present Agulu Deanery as Awgbu Town were no more part of Agulu deanery since some diocesan restructuring.