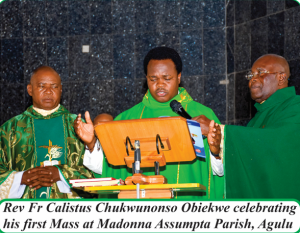 In his opening remarks at the Mass, the parish priest and the Dean of Agulu Deanery, Rev Fr Dr Joel Okechukwu, thanked God for the gift of his priests and religious from Agulu, who, he said, had been representing the community well in their vocations. He thanked God for giving them another addition of a newly ordained priest from the Missionary Society of St Paul, MSP, and then he prayed for their continued faithful service to God and mankind.

For the celebrants, he commended them for taking the right decision to be labourers in the vineyard of God as he urged them to continue with their candle lit. 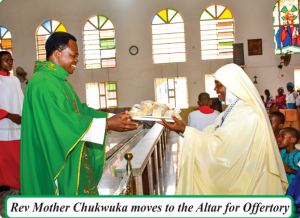 The cleric advised them to avoid anything that could drift them away from the doctrines of Christ and his teachings; even as he also advised them to always be with their sheep and not be found among those who wander about without consciousness of their mission. ‘Be around your sheep and avoid wandering about,’ he advised.

Speaking on behalf of the Agulu Priests, Religious, Aspirants and Seminarians Association, APRASA, Rev Fr Cajetan Obiekezie, thanked the parishioners for always celebrating their own as he advised the celebrants to be good ambassadors of the Church of Christ.

In their address of welcome, the Agulu Pastoral Council thanked God for the gift of his servants to the community as they presented the six celebrants with cash gifts and a car gift to the newly ordained priest, Rev Fr Calistus Chukwunonso Obiekwe, MSP.

In his vote of thanks, Rev Fr Calistus Obiekwe thanked them for their love for them and for

showering them with gifts and prayers. 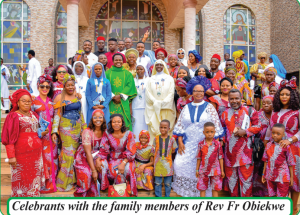 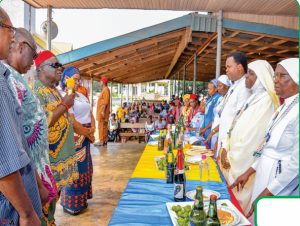