Leading in the concelebrated funeral Mass at St Vincent De Paul Parish, Uga, Aguata LGA, Anambra State, the Bishop of the Catholic Diocese of Ekwulobia (CADEK), Most Rev Peter Ebere Okpaleke, said the Eucharistic celebration was to continuously ask God for the repose of the soul of the late priest. He prayed God to accept the sacrifices and contributions of all who joined in the funeral ceremony and grant the soul of the deceased eternal rest. 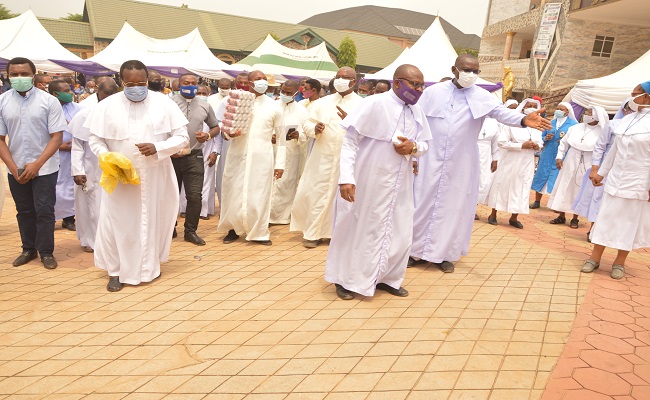 In his homily on the theme: “The Fact of Resurrection is Our Consolation”, the Vice Chairman, ADP-CADEK, Rev Fr Christian Umeojilinnaka, urged all who were saddened over the death to take solace in the belief which they had in the resurrection of the dead, as well as their faith that the late monsignor believed in eternal life.

He described Christians as children of resurrection and encouraged the living to aspire for eternal life.

The homilist, who further based his reflections on the stories of the miracles of raising of Lazarus from the dead and raising of Jarius’ daughter from the dead by Jesus Christ, as well as the story of the resurrection of Christ in the Bible, maintained that Christ had the power of resurrection.

St Vincent De Paul Parish, Uga, in a tribute that was read by the Secretary, Parish Pastoral Council (PPC), Dr Mrs Amarachkwu Dimejesi, described the late Msgr Akam as one who had with his many talents, positively touched the lives of many individuals.

The parish in the tribute that was signed by Vice Chairman, PPC, Nze Daniel Ezeigbokwe; Secretary, PPC, Dr Mrs Amarachukwu Dimejesi and the parish priest, Rev Fr Emmanuel Maduelosi, described the deceased as a major benefactor of St Vincent De Paul Parish, whose financial and moral support contributed to the successful dedication of the parish’s church building.

According to the tribute, the late Msgr Akam single handedly roofed the church building, picked the bill for the main gates of the church premises and through his numerous foundations gave scholarship to many students, empowered many youths and alleviated the sufferings of the poor.

It will be recalled that Very Rev Msgr Akam, the Founder/Chancellor and BoT Chairman, Tansian University, Umunya, and Proprietor, Konigin Des Friedens College, Uga and Enugu, among others, died on February 5, 2021, and was buried on Monday, February 15, 2021, at the Priests’ Cemetery, St Joseph’s Cathedral, Ekwulobia, Aguata LGA.

He hailed from Oka Village, Uga, Aguata LGA, and was until his death, a priest-in residence at St Clement’s Parish, Umuchu, Aguata LGA.

In his remarks, the deceased’s brother, Professor Uche Akam, on behalf of the family, appreciated the Catholic Diocese of Ekwulobia, Uga Catholic Community and the various individuals who supported the family and comforted them in their grief, for their goodwill.