Adejoh is FiBROM Winner for March

Alexander Johnson Adejoh has emerged the winner of the Fides Best Reporter of the Month Award for the month of March. This is the second time the reporter has clinched the award as an individual. The rest had been as a group.

Adejoh’s story on the front page of March 21-27, 2021 edition of Fides Newspaper, titled, “Fides, Hope of the Hopeless – Crippled Traffic Hero”, won him the award.

The story was an offshoot of a story he did in a previous edition of the newspaper where he reported about a crippled beggar, Abdulkalid Auta, who, controlled traffic at Aroma Junction, especially in the evenings when traffic management agents had closed for the day. 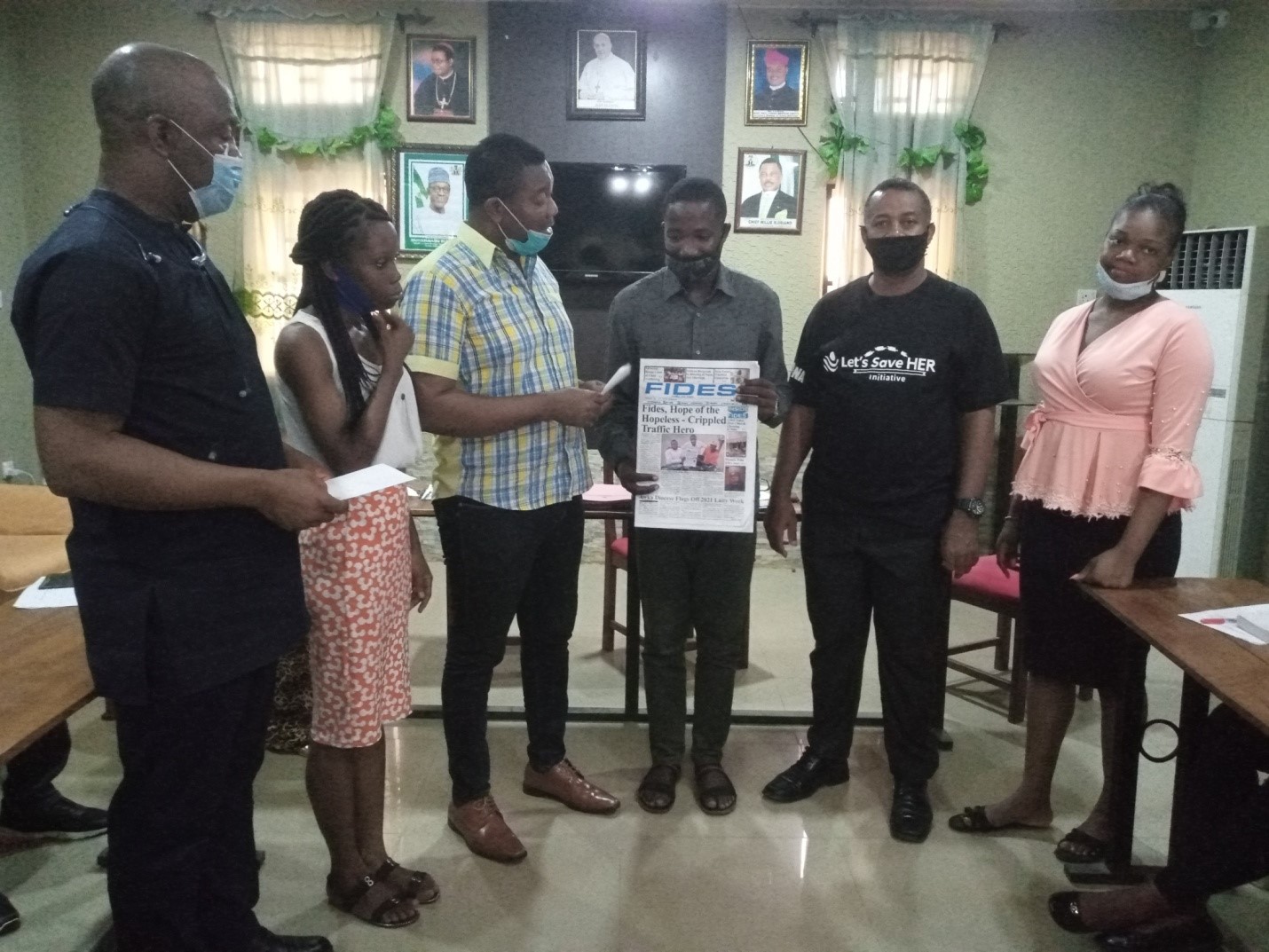 Before announcing the winner during the meeting of the News and Editorial Department, Fides Media, Monday, April 12, 2021, at the Archbishop A. K. Obiefuna Auditorium, Fides Media, the Editor-in-Chief, Fides Newspaper, Mr Jude Atupulazi, said Adejoh’s story was as good as the picture which was published alongside it. He added that Adejoh went the extra mile to prove that Fides Newspaper was not a mouthpiece of elitist members of society.

‘This shows that Fides Newspaper also cares for the poor and downtrodden,’ Atupulazi explained.

He eulogized Adejoh for what he described as not resting on his oars, having won the award a number of times. He added that the reporter did not go to sleep but worked harder to emerge the best reporter for the month.

The Editor-in-Chief therefore urged reporters to continue to do their best to find stories in unlikely places, adding that he began journalism practice in Anambra State without being known, but gradually became famous for the kind of stories he did and the way he wrote them.

Atupulazi equally encouraged reporters and other members of the News and Editorial Department not be limited by their space, noting that even though Fides Newspaper was not a national daily, it was being made known nationally.

He added that anyone who worked in Fides would be doing themselves a disservice if they believed that they were only known around the vicinity where they worked, especially in a digital age.

‘Keep conquering your space,’ Atupulazi charged, noting that one was known by the quality of work they produced.

Likewise, the Director of Fides Media, Reverend Father Dr Martin Anusi, while speaking, said he had foreseen Adejoh’s story bringing him the award and was sure he would win unless there was another story within the month which met the mark more than Adejoh’s did.

He reiterated that Adejoh did not rest on his oars, but rather put in more work which had borne fruit by way of making him the award winner for the month of March.

The Director congratulated the winner and gave him a personal gift beside the usual prize of N5, 000 given to any winner of the FiBROM award.

Adejoh, for his part, while commenting on the award, expressed happiness to have been named the winner of the month’s award and appreciated Mr Atupulazi for finding his story worthy of the award.

The FiBROM winner also thanked members of the Editorial Department for their efforts in making him the person he had become. Adejoh admitted that he had learned a lot and become a better person in Fides Media.

He appreciated the Director for his efforts in making him a better person and pledged to do even better in future.

An elated Adejoh later gave a treat to fellow members of Trends in Anambra Team, a team of young reporters in Fides Media which monitors and reports trending events within Anambra State.