By Ifeoma Ogbodo and Precious Ukeje

Two Fides’ reporters, Alexander Johnson Adejoh and Adejumoke Alebiosu, have emerged winners of Fides Best Reporter of the Month Award for April, 2021. The duo were announced winners for a story published on the cover page of May 2 – 8 Edition of Fides Newspaper, with the headline, “Awka, a Garbage City? …Public, Part of Problem – ASWAMA.” 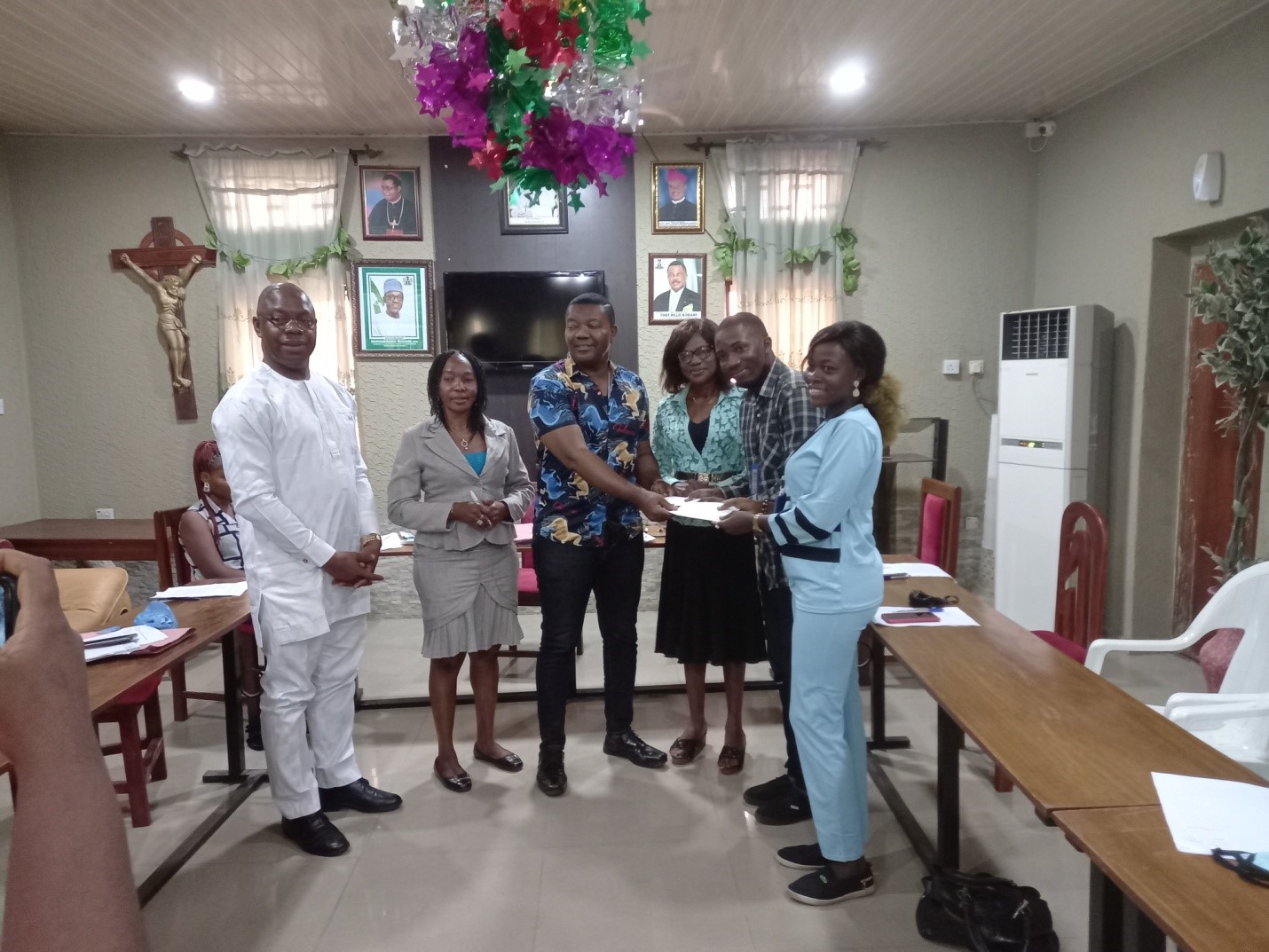 During the monthly meeting of the News and Editorial Department of Fides Media at Archbishop A. K. Obiefuna Auditorium, Fidesplex, Okpuno, the Director of Fides Media, Rev. Fr Dr Martin Anusi, who, reviewed the activities of the department for the previous month, described Adejoh and Alebiosu as hardworking journalists and noted that he had earlier presumed the story would secure them the award.

Presenting a cash prize to the duo, the Editor-in-Chief of Fides Newspapers, Mr Jude Atupulazi, commended them for their industry, while describing the story as a job well done. He further emphasized the influence of journalism, recalling that the story, when published, elicited a swift response from the ASWAMA MD.

Fides recalls that shortly after Mr Akorah, MD of ASWAMA, was reached by the reporters and titbits of the story, published on Fides Media’s Facebook Page, the agency swung into action and ensured that the refuse heap at Ossy Gambia Road, very close to Zaramax Hotel, was immediately cleared.

Fr Anusi said the story represented the core of journalism, being neither a friend nor foe to authorities.

Other members of the department, including Mr Atupulazi, were appreciated by the Director, Fr Anusi, for what he (the Director) described as dedication to work.

Others included Chidimma Udoye and Judith Ukachukwu, who work in the Typesetting Unit of Fides Media.

Atupulazi was lauded by the Director for unbiased judgments which he had shown since he singlehandedly began to select winners for FiBROM. Fr Anusi described him as someone who worked with everyone and made sure no one was left behind in the discharge of their duties.

For the parts of Udoye and Ukachukwu, the Director noted that he had observed them for a while and noticed that they diligently discharged their duties with much selflessness.

‘The spirit to be dedicated to what does not belong to you is everything,’ Fr Anusi said.

‘If you want to know your level of maturity,’ he continued, ‘how you measure your level of humanity, you should watch how you manage what does not belong to you.’

Responding, an obviously elated Adejoh appreciated the Director for what he termed the great communication skills and efforts he made in seeing that young people around him continued to grow in their crafts.

Meanwhile, while the Director appreciated the efforts of all units in the company, noting that they worked tirelessly and consistently to achieve effective and efficient productivity.