More tributes have continued to roll in honour of a USA-based Adazi-Nnukwu indigenous female religious, the late Rev Sr Margaret Mary Ngozi Ibeh, of the Mystery of Love Congregation, describing her as a great woman whose generosity and affection for others were second to none.

The Old Adazi Parish Vocational Association in a funeral oration that was signed by the President, Rev Fr Ignatius Onwuatuegwu and Secretary, Rev Fr Evaristus Oramah, eulogised the late Sr Ibeh as a woman with a heart of gold and the Dorcas of the 21st century, who was generosity personified.

According to the oration which was presented at the burial of the deceased held at the Mother of Perpetual Help Cemetery, Adazi-Nnukwu, Anaocha LGA, Anambra State, on Saturday March 6, 2021, Sr Margaret Mary Ibeh was a perfect blend of humaneness and holiness, who shared a lot of similarities with Saint Mother Theresa of Calcutta.

‘Sr Ibeh was generous with her time, her energy and resources. Her altruistic disposition was second to none. She was so compassionate that a mere sight of a suffering soul puts her in a perpetual restlessness until she sees the person’s pain ameliorated.

Sr Ibeh suffered with those who suffered and carried other people’s burden more than themselves. Her spirit of availability and solidarity to the association, her community and the Church was extraordinary,’ 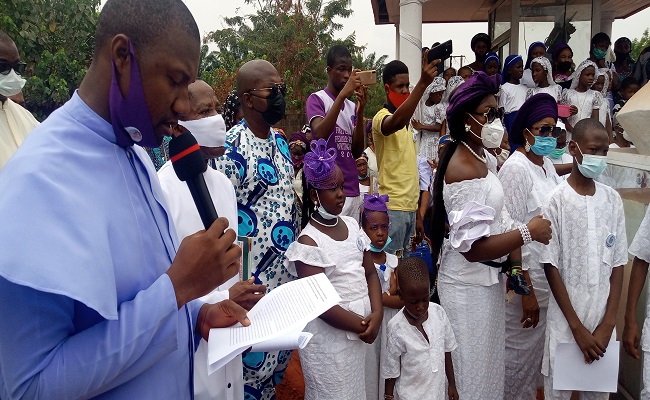 Pointing out that her death was a loss to the earth and a gain to heaven, the secretary, in the oration, recalled that Sr Ibeh had attended the annual meeting of the association at Adazi-Ani on December 28, 2020, and donated N20, 000 for booking of Mass for the happy repose of their dead members and dead parents, without knowing that she donated money for her happy repose too.

The association commended Sr Ibeh’s contributions to human, Church and community development, and eulogised him for the Mother of Perpetual Help Cemetery, Adazi-Nnukwu, which she renovated, fenced, beautified and turned into a sacred place of prayer.

Old Adazi Parish Vocational Association also paid tribute to the deceased for the annual memorial celebration for the happy repose of the dead which she initiated and hosted at the cemetery until her death, as well as the many poor children she picked their school fees and medical bills, as well as for the many groups of the Church which she supported until her death.

Speaking when the Central Executive Council of Adazi-Nnukwu Town Development Union (ATDU), paid a condolence visit to the bereaved Ibeh Family of Amolu Clan, Adazi-Nnukwu, the President General, ATDU, Hon Chief Frank Madubuike, extoled the late Sr Ibeh for her contributions to the development of the town. Hon Madubuike, described her as a great woman and an icon of rare philanthropy, whose impactful personality endeared her to many.

The late Sr Margaret Ibeh, who was in Nigeria for the annual mid-December memorial she hosted at the Mother of Perpetual Help Cemetery, died after a brief illness at St Benedict’s Hospital, Adazi-Nnukwu on January 16, 2021. Her death occurred one month after the event, and she was aged 67.